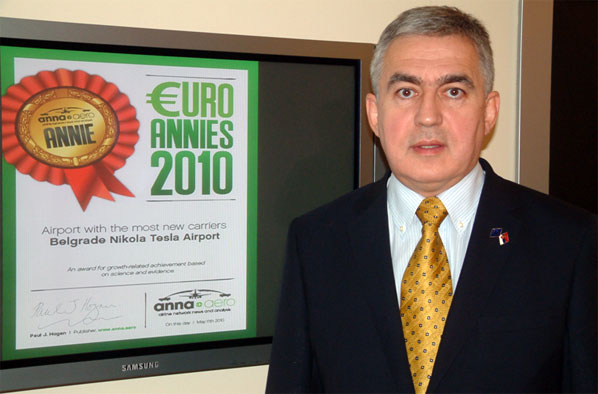 Prof. Dr. Velimir Radosavljevic, Belgrade Nikola Tesla Airport's Director General, with the anna.aero €URO ANNIE 2010 Prize for the “Airport with the most new carriers” – 10 different newcomer airlines are starting services to the Serbian capital in the space of just six months. See the full award report, and all the reaction.

Just before the end of last year, the EU liberalised some of its visa rules, as a result of which citizens in Serbia are now able to visit most EU countries without the need for a visa. As a consequence, there has been a surge of interest in serving the country’s main airport, Belgrade Nikola Tesla, with 10 airlines starting services to the Serbian capital in the space of just six months. The 10 airlines are starting a total of 12 services (Spanair and Wizz Air are starting two each), with all new flights operated between two and seven times weekly. 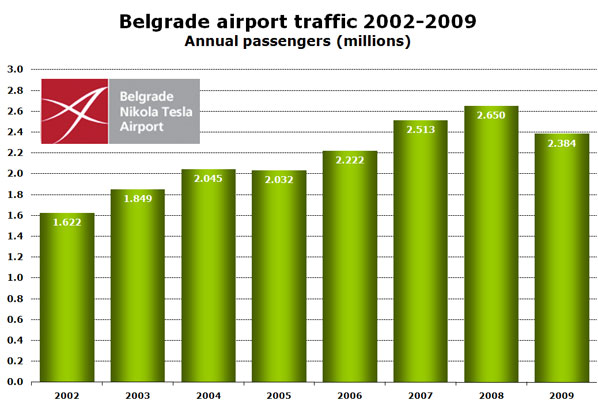 The airport’s seasonality profile shows a typical European pattern with demand peaking in July and August and dipping in February. In the first quarter of 2010, passenger numbers are up 6.6% compared with the same period in 2009. As a result, demand so far this year is just below the peak year of 2008, though the additional new routes starting in the second quarter of 2010 suggest that the airport could exceed the 2.65 million passengers handled in 2008. 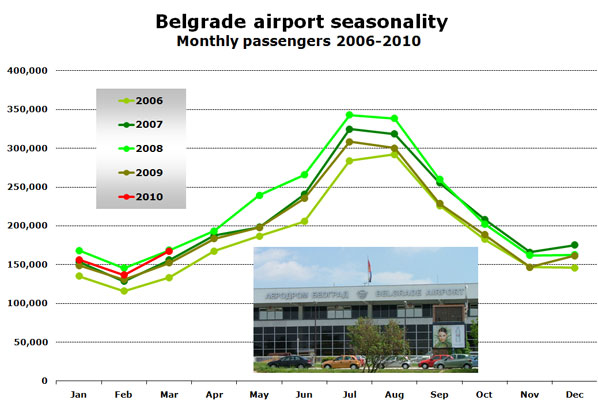 According to OAG schedule data for this August, a total of 26 carriers will be operating scheduled services to and from Belgrade airport, with national carrier Jat Airways leading the way with almost 200 weekly departures, representing 46% of all scheduled flights at the airport. This summer, the carrier will serve 30 destinations non-stop, with the highest frequency routes being to Tivat and Podgorica in neighbouring Montenegro. Montenegro Airlines, with 48 weekly departures to the same two airports, and Lufthansa, with 35 weekly departures (three daily flights to Munich and two daily flights to Frankfurt), are the next two busiest carriers at the airport. Lufthansa’s presence as the leading global airline is reinforced by the presence of its subsidiaries Austrian (three daily flights to Vienna), germanwings (serving Cologne/Bonn and Stuttgart) and Swiss (daily flights to Zurich). Despite the presence of established LCCs such as germanwings, Norwegian and Wizz Air, there are currently no services from either easyJet or Ryanair.

Despite the surge in new routes, there have also been a few route withdrawals in the last couple of years. Olympic Airlines withdrew its Athens service, while Jat has axed routes to Banja Luka, Brussels, Oslo, Prague, Pula and Tirana, while Alitalia dropped Milan Malpensa, Lufthansa dropped Düsseldorf and Swiss dropped Basel.

The leading country markets from Belgrade are Montenegro and Germany, which in the peak summer month both have around 8,000 weekly departing seats. While only two airports are served in Montenegro, seven different airports in Germany (Berlin Tegel, Cologne/Bonn, Dortmund, Düsseldorf, Frankfurt, Munich and Stuttgart) are all linked to Belgrade with non-stop flights. Austria ranks a clear third thanks to Austrian, Jat Airways and niki all serving Vienna, while France, Italy, Switzerland and the UK are all vying for fourth spot. 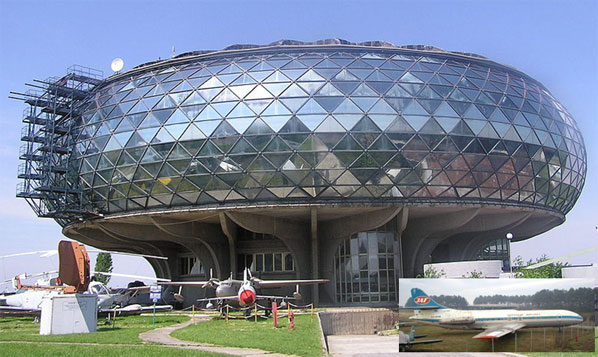 The Museum of Aviation in Belgrade is located next to Belgrade Nikola Tesla airport. Some 50 aircraft are on permanent display out of the museum’s total collection of over 200. For civil aviation enthusiasts, a JAT Caravelle is possibly the highlight of the collection.