China at the forefront of Asian air travel growth; Indonesia and Vietnam booming in 2010; Hong Kong, Japan and Thailand struggle

The leading ‘tiger’ is… Lion Air. The Indonesian airline’s phenomenal 97.2% capacity growth is slightly misleading as its 2010 data now includes Wings Air, a regional subsidiary, but there’s no escaping the underlying importance of this big 737-900ER launch customer which has ordered 178 units – 30 have so far been delivered.

While European air travel news has been dominated recently by the saga of the volcanic ash cloud (and various strikes), and the US air transport industry has been reflecting on the latest merger between two of its major carriers, what has been happening in Asia? Which airlines are growing and which are shrinking? How quickly are different country markets developing? This week anna.aero takes a closer look at the latest trends in the region.

China has five of top 10 airlines

Using schedule data provided by the airlines to OAG a comparison has been made between weeks in May 2009 and May 2010 for all the airports designated to lie in Asia. Five of the top 10 airlines (by weekly departing seat capacity at Asian airports) are based in mainland China (shown in red). All of them have increased capacity by at least 5%. There are a further four Chinese airlines in the remainder of the top 30 airlines. 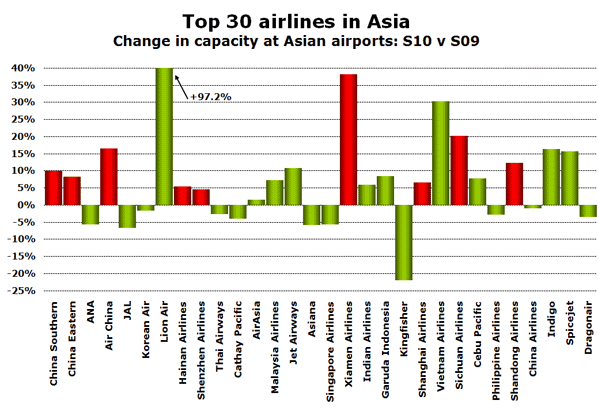 The other top 10 airlines are ANA and JAL in Japan, Korean Air, Thai Airways and Lion Air of Indonesia. With the exception of Lion Air all of these carriers are still reporting capacity reductions compared with a year ago.

Lion Air’s phenomenal growth is slightly misleading as its data for 2010 includes flights operated by Wings Air, a 100% subsidiary which operates smaller regional turboprop aircraft. Last year Lion Air’s fleet grew with the acquisition of nine brand new 737-900ERs (for which it was the launch customer) straight from the Boeing factory. According to the airline’s website it has ordered 178 of this type of aircraft of which 30 have so far been delivered according to Boeing.

As our recent Chinese trendwatch showed demand for air travel in China is booming once more. Already the second biggest aviation market in the world (after the US) the country’s airports handled 486 million passengers last year, up 20% on 2008. Capacity growth is still in double-digits and is beaten only by Indonesia and Vietnam in the region. 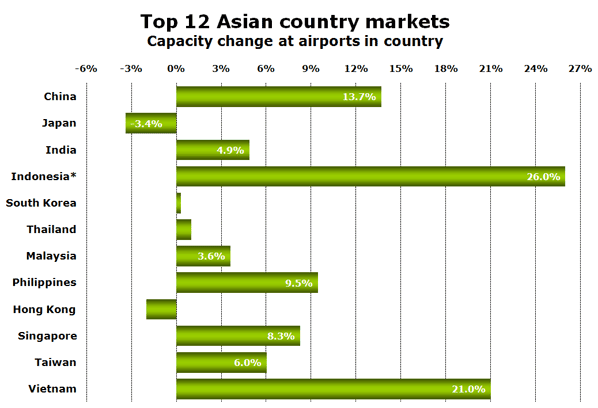 Source: OAG Max Online for w/c 4 May 2009 and w/c 10 May 2010 | * Indonesian growth is estimated as neither Batavia nor Mandala Airlines provided schedule data to OAG last May.

Indonesian growth has been estimated as two of the largest carriers in Indonesia (Batavia and Mandala Airlines) did not provide schedule data to OAG in May 2009. Using their 2010 data as a proxy for 2009 suggest that Indonesian capacity growth is around 26% this May. This may be reasonably accurate as according to Indonesian government statistics for the first two months of 2010, passenger numbers at Indonesia’s five biggest airports (which account for around 70% of total airline capacity at Indonesian airports) were up 22%.

The only countries showing a capacity decline are Japan and Hong Kong. As shown in the previous graph both ANA and JAL are reporting capacity reductions with even more likely to come from JAL as it continues to restructure to avoid bankruptcy. Hong Kong’s decline is in part due to the growing number of non-stop flights between China and Taiwan which used to have to go via an intermediate stop, typically Hong Kong.

Vietnam’s growth appears to be being driven by Vietnam Airlines where capacity is apparently up 30% helping to generate growth at Vietnam’s airports of around 20%. Jetstar Pacific is also growing and will soon be joined by VietJet AirAsia, the latest LCC in which AirAsia has made an investment.

The current political unrest in Thailand is likely to impact inbound tourism and air travel demand in general as protesters have, in the past, targeted airports.