Our man in Moscow – anna.aero’s Andreas Akerman – was at Moscow Vnukovo Airport yesterday to send off the first passengers on Yakutia Airlines’ inaugural flight to the Russian Far East destination of Pevek (pop. 6,000). Vnukovo’s deputy sales division head, Leonid Shipil (centre), translated passenger remarks including those of this delighted business class traveller, Ekaterina Raznatovskaya, who was thrilled to finally have non-stop flights. Photo by Andrey Sokolov, head of marketing and advertising, Vnukovo Airport.

As one of the much touted BRIC nations (along with Brazil, India and China), the demand for air travel is often a good indicator of economic development. Last year, Russian air travel was down significantly in the first half of the year, before stabilising in the second half. However, in 2010, traffic is growing rapidly once more. This week’s anna.aero country profile takes a look at how airports, routes and airlines compare with last May. According to OAG schedule data, total capacity at Russian airports is up 20% this May compared with a year ago. 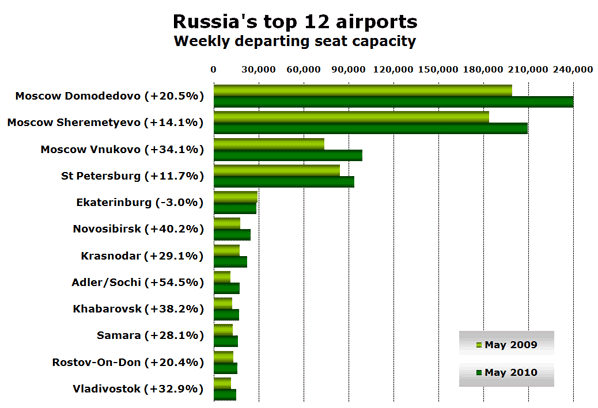 Moscow’s three airports at Domodedovo, Sheremetyevo and Vnukovo account for 52.4% of all Russian airport capacity, compared with 53.4% last year. This May, their combined capacities are up 17.4% compared with 2009, slightly below the national average. With the exception of Ekaterinburg (down 3%), all of the other top 12 Russian airports are reporting capacity growth of at least 10% with Adler/Sochi (plus 54.5%) and Novosibirsk (plus 40.2%) reporting the highest growth rates.

Analysis of the leading country markets (for scheduled services) reveals that while Germany is still the leading country market, capacity to and from the country has fallen by 8% during the last year. Turkey has now leapt into second place with scheduled capacity growing by more than 50% since last May. Some of this growth may be explained by the re-classification of former charter services as scheduled services. Last May, for example, Ural Airlines operated just two weekly flights from Ekaterinburg to Istanbul, but this May it is offering 38 weekly departures between the two countries, including 16 weekly flights from Moscow Domodedovo to Antalya and 10 weekly flights from St Petersburg to Antalya. 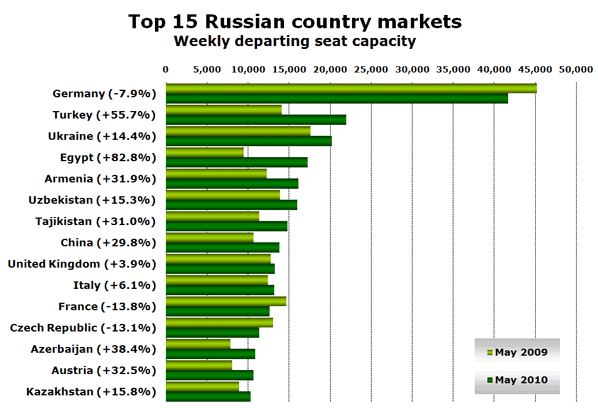 A total of 104 different airlines operate scheduled services into and out of Russia, with the national carrier Aeroflot, which anna.aero recently analysed, still #1 with almost 550 weekly departures. Five of the top six airlines (by frequency) are Russian with Aeroflot followed by Transaero (190 weekly departures), Lufthansa (112), S7 (104), Rossiya (99) and Ural Airlines (85). After that come Aerosvit of the Ukraine (84) and Armavia of Armenia (59). Overall international capacity is up 12% year-on-year in May.

Domestic scheduled capacity is up 24% this May compared with last year. S7, Aeroflot and UTair are the leading domestic carriers, though the sprawling nature of the country and the proliferation of small regional carriers, means that no carrier has more than 20% of the domestic market. The top three airlines share around 47% of the total market based on seat capacity, but there are 29 other carriers also operating domestic services. 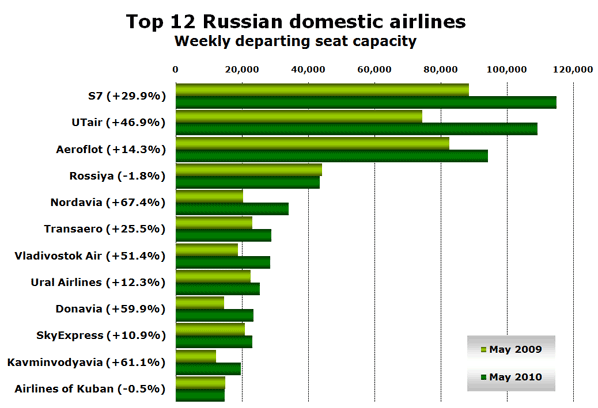 UTair reported at the end of April that according to Russian Transport Clearing House data for the first quarter of 2010, it was the leading domestic airline in terms of passengers with 889,042. This is an increase of 64.1% compared with 2009. The airline’s fleet comprises a mix of Western-built aircraft (16 737s, three ATR-72s, 14 ATR-42s) and older Russian aircraft (including 19 TU-154s, 31 TU-134s and eight Yak-40s). According to OAG data, it still ranks second in terms of capacity to S7, but if its load factors are significantly better, then it could indeed be transporting more passengers than its rival. It already operates more Russian domestic flights than any other carrier.

One of the fastest growing airlines is new low-cost carrier Avianova which currently has a 1.4% share of domestic capacity. The airline recently won a €URO ANNIE award for being the biggest new airline in Europe. Having established a base in Moscow (first in Vnukovo and then moved to Sheremetyevo), the airline is now looking starting routes from St Petersburg.