While starting a new airline can be relatively easy (if you have enough money), building a new airport is a rather longer, more time-consuming and much more expensive activity. Last weekend, however, saw the grand opening of a new airport in Florida, though technically it was planned as a replacement for an existing airport.

The F-22 Raptor was the first aircraft to touch down at the US’ newest airport, while the first passengers were greeted by a party atmosphere upon arrival. (Pictures courtesy of News Herald)

The new Northwest Florida Beaches International Airport (to give it its full name) replaces the existing Panama City – Bay County International Airport in Panama, Florida, which closed on Saturday. The only carrier serving the old airport was Delta, which operated eight to nine daily flights to its main base in Atlanta and three daily flights to Memphis, with both routes operated by 50-seat regional jets. According to US BTS data in 2009, the Atlanta route (operated for Delta by Atlantic Southeast) carried 222,000 passengers at an average load factor of 81% while the Memphis route (operated by Pinnacle) generated 77,000 passengers with an average load factor of 73%. 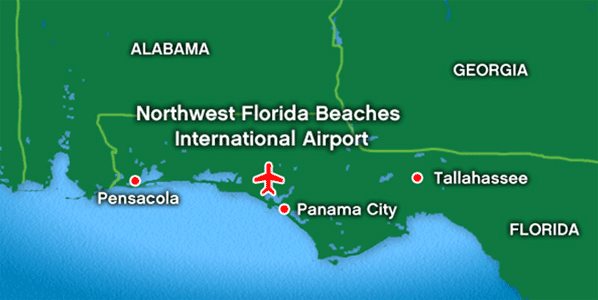 The opening of the new airport has enticed Southwest to serve the market with twice-daily flights from four of its main bases at Baltimore/Washington, Houston Hobby, Nashville and Orlando. Despite only generating eight extra departures and arrivals, the airline’s 137-seat 737s will almost treble seat capacity at the new airport compared with the old one. Assuming a 70% load factor across all the new airport’s routes, around 850,000 passengers could be handled during the first 12 months of operation.

Combined with Delta’s nine daily flights to Atlanta and three to Memphis, there will thus be a total of 20 departures and 20 arrivals each day spread across six domestic destinations.