Passenger numbers stable in Canada in Q1; Ottawa only top 10 airport growing at more than 5%; Demand up at Air Canada and WestJet According to data provided by Canada’s top 10 airports, passenger numbers passing through the country’s main airports remained virtually unchanged in the first quarter of 2010. The only airport to report growth of at least 5% in each of the first three months of this year was the airport serving the country’s capital in Ottawa. All of the leading airports (excepting Kelowna which has yet to report any traffic data for 2010) reported year-on-year growth in at least one month so far this year. The country’s busiest airport at Toronto Pearson saw traffic fall less than 1% in January and remain unchanged in February. 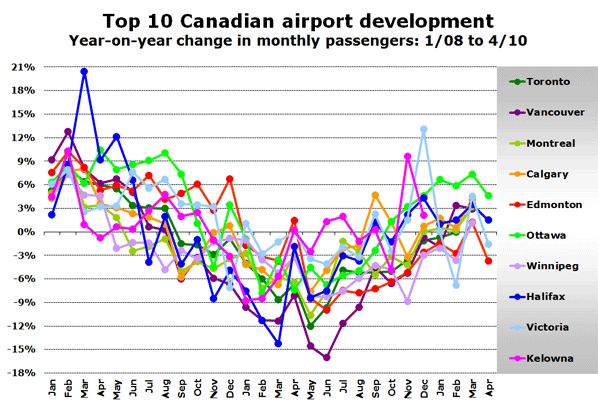 The recently renamed Billy Bishop Toronto City Airport (formerly known as Toronto Harbour Airport) does not publish monthly traffic statistics but has revealed that it expects to see some 1.2 million passengers pass through the airport in 2010. This would rank it just outside the top 10 along with Quebec, St Johns and Saskatoon which should also all handle at least one million passengers in 2010. The downtown airport serving Toronto reported last week that it has had two carriers respond positively to its Request For Proposal to start new commercial services from the airport. At present only Porter Airlines operates from the airport using a growing fleet of Q400s.

Although passenger numbers remained virtually unchanged across Canada’s main airports the country’s two major carriers both reported growth in demand (as measured by RPMs – Revenue Passenger Miles) during the first four months of 2010. 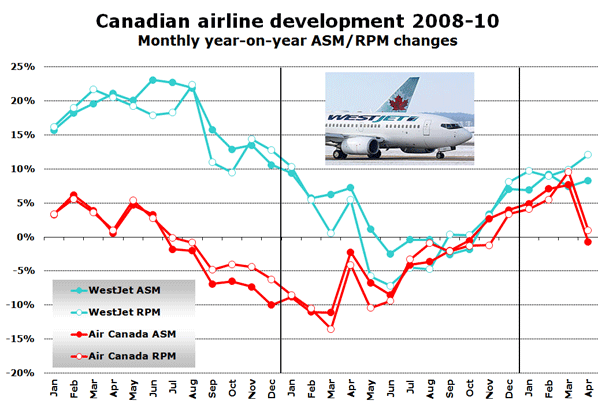 Air Canada’s April figures were impacted by the volcanic eruption in Iceland which disrupted transatlantic flights for several days. As a result Atlantic RPMs were down 14% in April. 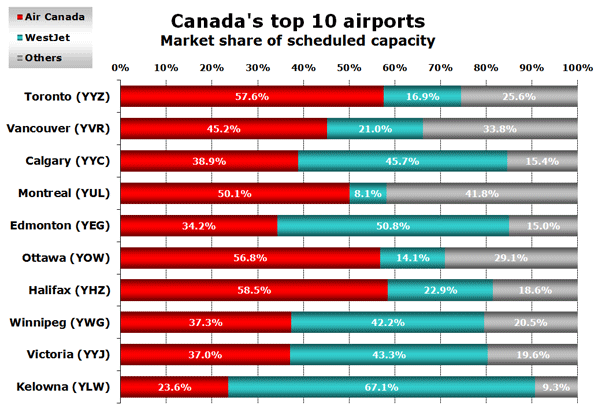 Air Canada operates more seat capacity than WestJet at five of the top 10 airports (Toronto Pearson, Vancouver, Montreal, Ottawa and Halifax) while the relative newcomer has a bigger presence at Calgary, Edmonton, Kelowna, Victoria and Winnipeg.