Cake of the Week –  Malta's second this year  (the previous winner was for another low cost airline with an orange livery). Luis Fernandez, Ryanair's Malta manager, helps himself to a slice of cake, watched by a hungry-looking Alan Borg, Head of Airline Marketing, Malta International Airport (far right)

Ryanair first began serving the Mediterranean island of Malta at the end of October 2006 when services from London Luton and Pisa began. Dublin flights began the following February followed by Bremen in September 2007 and Barcelona (Girona), Stockholm Skavsta and Valencia in October. All of these first seven routes were from existing Ryanair bases but the eighth route started in December 2007 was from Venice Treviso, which was not a base. Only Air Malta offers more destinations than Ryanair (39 versus 19). Two of Ryanair’s new routes, Bologna and Marseille, are already served by Air Malta while Madrid is served by both Iberia and Vueling.

Over the next two years additional services were launched from the airline’s Bari, Bristol, Edinburgh, Madrid and Trapani bases while Bremen and Valencia services were axed. In March of this year two more routes were started from Bournemouth and Leeds/Bradford bringing the Maltese network to 13 routes. This week saw the airport become a designated base for Ryanair with the basing of a single 737-800 at the airport and the launch of five new routes (to Billund, Bologna, Krakow, Marseille and Seville) and the re-introduction of Valencia services.

Only London Luton is served daily. In total Ryanair will be operating 58 weekly departures in summer across 19 routes resulting in an average route frequency of just over three flights per week. 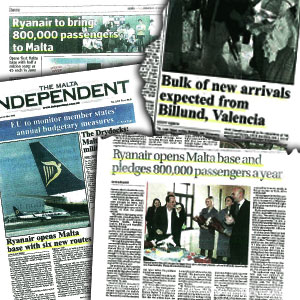 Malta may be the smallest EU country but its big and vocal press showed much warmth and appreciation for the economic importance of the establishment of Ryanair’s latest base.

With 19 routes this summer only Air Malta offers more destinations from the airport (39 in total), while other low-cost carriers present include easyJet (six routes), Norwegian and Vueling (two routes each), as well as bmibaby and SmartWings (both with a single route). While most of Ryanair’s routes do not face direct competition there are a few exceptions. Bologna and Marseille, two of this week’s new routes, are already served by Air Malta while Madrid is served by both Iberia and Vueling.

As revealed in our Malta country profile recently, passenger numbers at the airport have remained relatively flat during the last decade, fluctuating between 2.7 million and 3.1 million. The airport will be hoping that this increased commitment from Ryanair will help the airport back to growth. According to the airline it expects the 19 routes to generate around 800,000 passengers per annum.