Wizz Air this week marked its sixth birthday with the addition of four new routes from its Sofia base - taking the total number of destinations served by the airline from Sofia to 14. Bulgaria’s minister of transport, Alexandur Zvetkov and Kristian Krustev, Wizz Air CEO, cut the ribbon before being joined by MP Svetoslav Tonchev and Dimitur Bogdanov, chairman of the board of directors, Sofia Airport.

This week’s introduction of four new routes generating an additional 12 weekly departures means that Wizz Air’s base at Sofia will this summer be the airline’s 10th busiest, with 52 weekly departures spread across 14 destinations. Apart from London Luton, which is served daily, all other destinations are served with either three or four weekly departures. Wizz Air first started serving Sofia in September 2005 from its base at Budapest before flights from London and Rome began in 2006. Dortmund was added in October 2007 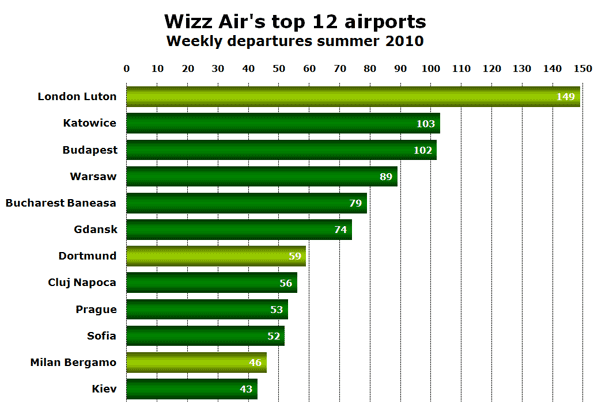 A base was established at the airport in July 2008 with the launch of five further destinations; Barcelona, Brussels Charleroi, Milan Bergamo, Valencia and Varna. Venice Treviso was added during the summer of 2009 and Eindhoven at the beginning of the last winter season in October 2009. Now the addition of thrice-weekly flights to Forli, Frankfurt Hahn, Madrid and Paris Beauvais brings the number of destinations to 14.

Despite being known as a Central European airline, Wizz Air’s biggest airport for flights remains London Luton, with almost 50% more flights at that airport than any other this summer. Dortmund and Milan Bergamo are the only other non Central European airports (in pale green) that rank in the airline’s top 12.

Three A320s now based at Sofia 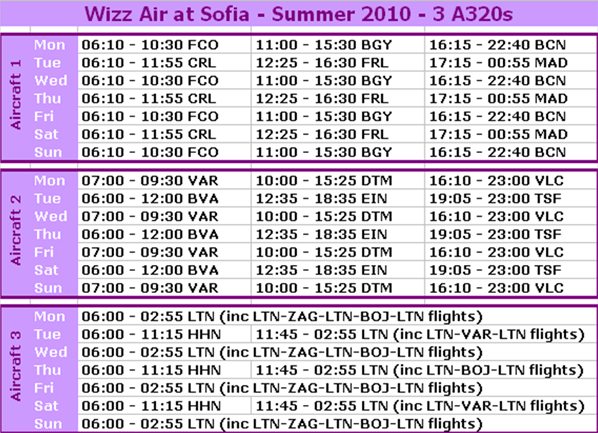 An analysis of the airline’s Sofia schedules reveals that two of the three A320s operate straightforward out and back flights, but a third aircraft operates daily flights to London Luton from where it then operates a number of other services (such as Luton – Zagreb – Luton, Luton – Bourgas – Luton and Luton – Varna – Luton) flights before returning to Sofia early the following morning. As a result, from next week, all Wizz Air flights from London Luton to Sofia depart from the UK at 21:50 and arrive in Bulgaria at 02:55 the following morning, local time.