There were no celebrations at London Stansted but on arrival in Ciudad Real anna.aero’s editor Ralph Anker (right) was greeted by José Lopes, Airlines Development Director for Aeropuerto Central Ciudad Real (left) and Luis Fernández-Mellado, Ryanair’s Sales & Marketing Manager for Spain, Portugal, Malta and Morocco (centre). Over 90 passengers, including several local journalists, were booked on the return flight to London.

The impressive new airport near Ciudad Real in central Spain welcomed its first international scheduled service last week and anna.aero’s editor was the only journalist on board. The Ryanair flight from London Stansted took two hours and 20 minutes and carried 43 passengers, an apparent mix of Spanish students and mature English couples. Arriving in glorious sunshine, the aircraft was welcomed with the traditional water cannon salute provided by the airport’s fire trucks. Over 90 passengers, including several local journalists, took the return flight back to London while the flights over the holiday weekend were almost fully booked. The Ryanair service will operate three times weekly throughout the year.

The airport is located around 15 minutes drive south of Ciudad Real, which is connected to central Madrid in less than an hour by the Avé high-speed train. In the future, the airport expects high-speed trains to stop at the airport as the connecting walkway from the terminal has already been built. Normally we show you water cannon salutes from the outside but this is what it’s like from the inside. A total of 43 passengers experienced this rare event before disembarking to be greeted by local media representatives at Spain’s largest privately financed and built airport. 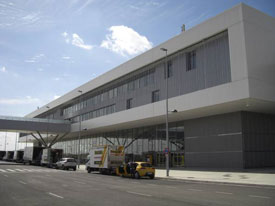 The airport’s multi-level terminal building can cater for more than two million annual passengers. The trucks in this photo were supporting a film crew who were shooting a TV drama in the terminal during one of the airport’s less active days.

The airport welcomed its first scheduled services in December 2008, a couple of years later than originally planned. Initially, there were flights to Palma de Mallorca with airberlin, and Barcelona and Gran Canaria with Air Nostrum (operating on behalf of Iberia). These domestic routes generated 53,557 scheduled passenger movements in 2009. The Air Nostrum flights were abandoned during the summer of 2009, while airberlin’s Palma service appears to have been terminated last Sunday (30 May), leaving the new Ryanair service to London as the only scheduled operation. The airport is optimistic that Ryanair will add at least two further destinations in the near future while negotiations are continuing to get an extension of the airberlin service.

The airport also accepts private aircraft and, as the gateway to the La Mancha region famous for its hunting in winter, the airport has welcomed a number of wealthy clients. The area is also famous as the setting of the adventures of Don Quixote and at one point the airport was going to include his name in the title.

The three-storey terminal building is designed to handle around 2.5 million passengers annually. This should be more than enough capacity for the foreseeable future.