Low-cost rivalry hots up in Barcelona; Ryanair launches El Prat base with five aircraft and 20 routes from September

The Battle of Barcelona goes straight to low-cost shootout. Keeping the goal are Vueling’s Alex Cruz and Spanair’s Mike Szücs.

Shareholder dividends, no new fleet orders and setting up a base at a major European airport? What does Ryanair think it is these days, a legacy carrier? Last week’s announcement by the Irish low-cost giant that it will start its 42nd base in September from Barcelona’s El Prat airport will give Vueling’s shareholders (including Iberia) and Spanair (now independent and fighting to carve out its own personal identity) something to think about. Since the opening of the splendid new terminal, Barcelona’s more than adequate old terminal has felt a bit empty with easyJet and other LCCs almost swamped by the facility. Ryanair’s decision to base five aircraft there and operate 135 weekly departures across 20 routes will, at a stroke, make it the airport’s fifth biggest carrier (in terms of flights and seats) after Vueling, Spanair, Iberia and easyJet.

Iberia’s influence has fallen significantly during the last decade

Back in 2000, Iberia and its regional partner Air Nostrum accounted for just over half of all the 19.5 million passengers passing through Barcelona’s main airport. Spanair had just over 8% of the market, Air Europa 6% and easyJet just over 2%. 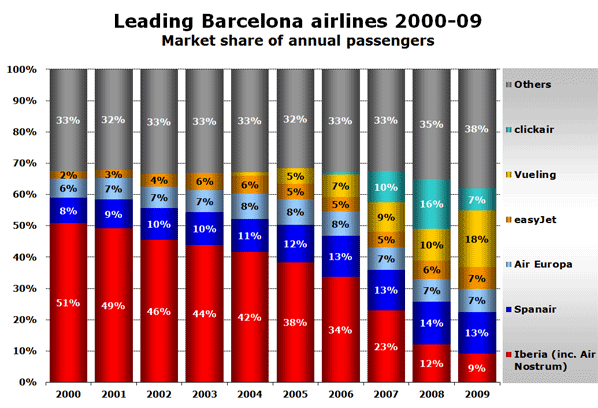 In just nine years, the picture has changed dramatically. Air Europa, easyJet and Spanair have all grown their market share while independent low-cost airline Vueling arrived in 2004, followed by Iberia-supported clickair in 2006. Now clickair and Vueling have merged to form the new Iberia-supported Vueling. However, even combining last year’s figures for clickair and Vueling shows that Iberia’s share of passenger traffic at the airport is around 34%, down one-third from the 51% of 2000.

Ryanair’s 20 planned routes from the airport consist of 10 domestic routes and 10 international routes; four to Italy and one each to Belgium, France, Germany, Ireland, Norway and United Kingdom. The 10 domestic routes account for 60% of the airline’s weekly frequencies.

Many of Ryanair’s new Barcelona routes are duplicated at the airline’s Girona base further north. It will be interesting to see what impact the new Barcelona routes will have on Girona routes and frequencies. Eight of the 20 routes are already served by Ryanair from both Girona and Reus. Furthermore, all of the destinations (with the exception of Cagliari) are already served from Barcelona by other carriers either to the same airport or sometimes to the bigger airport closer to the city such as in the case of Brussels, Milan, Oslo, Paris and Venice.

According to OAG data for August 2010, Ryanair’s network of 20 destinations will be beaten only by Vueling (43 routes) and Spanair (34 routes). Iberia including Air Nostrum (18), easyJet (15) and Air Europa (12) will all have less diverse networks than Ryanair come September.