anna.aero in Moscow: Russia’s Transaero growing at 70% in 2010; Miami and New York planned for later this year 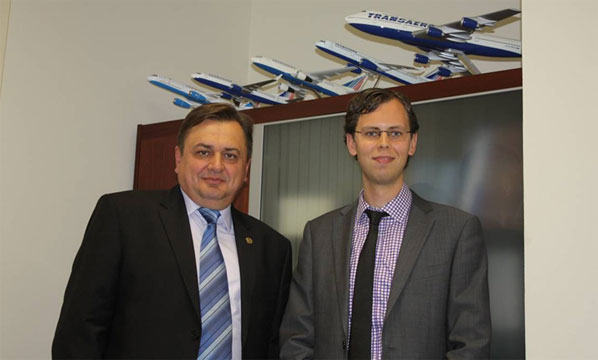 The deputy director general of Transaero, Dmitry Stolyarov, gave anna.aero’s assistant editor Andreas Akerman insight into the Russian airline that has grown by 70% so far this year, a continuation of several years’ rapid expansion. 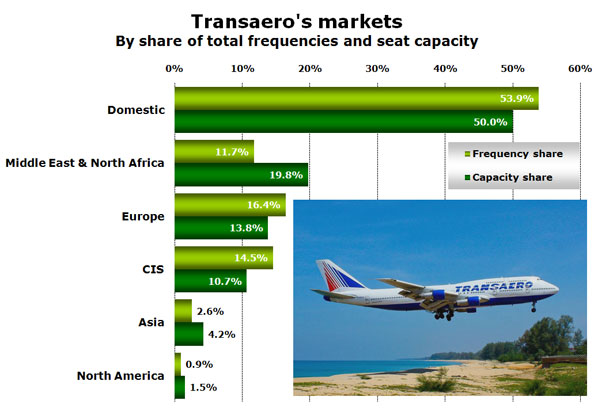 Today, domestic services account for 50% of the airline’s capacity, a great increase since anna.aero last analysed the airline early last year. 10 domestic routes were launched during last year, a year that otherwise was a tough year on the world economy, and only the last few weeks has seen the launch of four new domestic services. As a sign of this expansion, Transaero is now serving all major cities in the Russian Far East. The airline is hoping that the larger domestic network increases transfer traffic between domestic and international services.

Services to Tel Aviv, which was the airline’s first destination in 1991, and leisure flights to Egyptian resorts are also among the airline’s most important markets. Charter flights only form a minor part, around 11%, of the airline’s total operations. 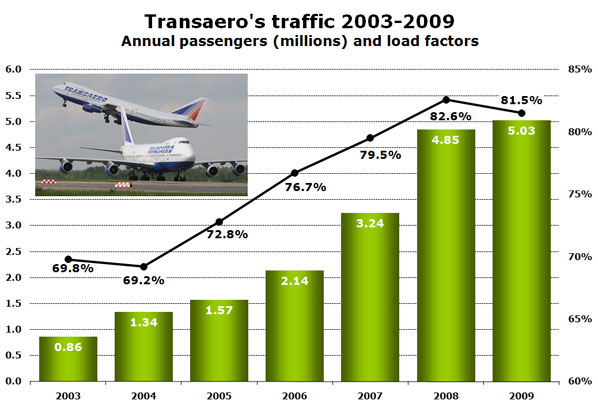 Transaero has managed to improve its load factors as the airline has grown steadily. The passenger growth in 2009, 3.6%, was more modest than the over 50% annual growth that took place the previous two years, however, the first four months of this year have revealed a staggering 68.2% growth.

Further growth is to be expected as Transaero has large aircraft deliveries lined up. The airline has had three of its 10 ordered Tu-214s delivered. These are equipped to ICAO standards with extra avionics and are used throughout the network – to India, Egypt, Europe and CIS – where its size and range is suitable. Transaero is also having five 777s and nine 747s, former Singapore Airlines and JAL aircraft, delivered. The first of the 747s was delivered on Thursday 27 May, as anna.aero was the first news service to find out. Since only four of the airline’s 747-200s are to be phased out with the delivery of these aircraft, the order brings a huge capacity increase to Transaero.

Expanding to the Americas; bilaterals restrict growth, but limit competition

Transaero serves Canada and the Dominican Republic in the Americas, but is currently undergoing an accreditation process in the US, hoping to launch flights to Miami and New York this autumn. Plans are also underway for flights to Rio de Janeiro. The airline is in dialogue with Brazilian authorities, negotiating with the airport and setting up a sales office. The Rio route is, like a major part of Transaero’s network, leisure oriented and once it launches, it is likely to operate once weekly or even less often. Miami will be served twice weekly to begin with, while New York will get three weekly frequencies.

A key issue for Transaero is that most Russian bilateral air services agreements are highly restrictive. As they were signed during the Soviet era, when Aeroflot was the country’s only carrier, most agreements are out of time and do not meet market requirements.

On the other hand, Russian airlines are faced with severe financial penalties for importing foreign aircraft. When aircraft cost 40% more for Russian airlines than its foreign competitors, Stolyarov points out that there also are benefits in keeping agreements that are restrictive to foreign airlines. If the Russian government was to abolish the import fees, Transaero would immediately lobby for all agreements to be liberalised.

High frequency routes to be split between Moscow airports

While Transaero’s main operations are and remain at Moscow’s Domodedovo Airport, the airline has decided that some of the flights on the airline’s high frequency routes (defined as three or more flights per day) will be moved over to Sheremetyevo airport. The reasoning behind this is both that passengers in the north of the Moscow catchment area have a preference for Sheremetyevo and that passengers will be able to transfer between Transaero and other airlines serving the Aeroflot dominated airport. Routes that will be affected are for example to Tel Aviv and Astana as well as to leisure destinations like Sharm El-Sheikh and Antalya.

Dmitry Stolyarov does not fear that this split between airports will make Transaero less attractive to alliances. The airline’s growing domestic network should increase its appeal and only a limited amount of frequencies would be moved from the Domodedovo hub. While it is no secret that the airline is in talks with Star Alliance, no decision has yet been made and Stolyarov says that the airline prefers a step-by-step approach, signing separate agreements with Star Alliance members, such as bmi and Austrian Airlines, ahead of a possible future membership.