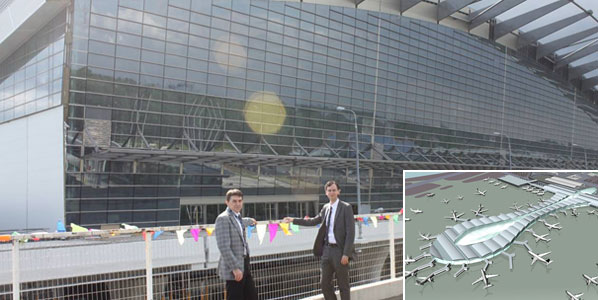 Glass and steel: Vnukovo’s almost completed new terminal brings the airport to a new division in the Moscow airport system. Vladimir Putin is soon coming to inspect the construction and anna.aero couldn’t miss the opportunity to beat the prime minister to the job. Vnukovo’s head of marketing and advertising Andrey Sokolov showed our assistant editor Andreas Akerman the state-of-the-art building.

Although Vnukovo Airport is the closest to the city centre of the three Moscow airports and offers convenient surface access, its central location restricts it from growing larger than its competitors. Still, passenger numbers have grown rapidly, enough to fill current capacity, and the airport is in the process of finalising its brand new, state-of-the-art terminal, which nearly doubles current possible passenger throughput by adding annual capacity for another 7 million. 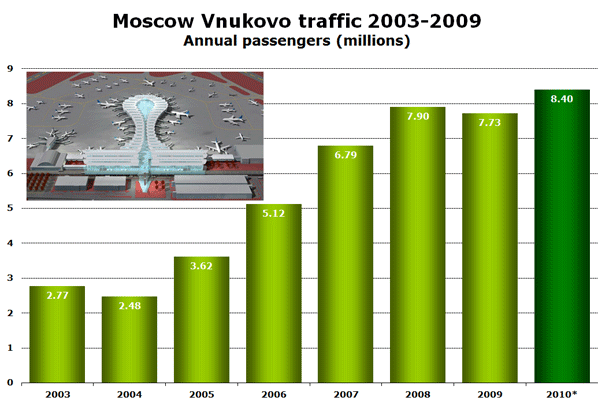 The rapid growth that Vnukovo experienced during the second half of the last decade turned to a fall in 2009. Although the airport itself has expected the impact of the global economic crisis to be greater, with passenger numbers falling down to 7.5 million, the decrease was milder at only 2.1%. This was in spite of the fact that 60-65% of the airport’s passengers travel for business. Today, the airport is again growing. Passenger numbers for this year’s first four months were up by 32.5% on the previous year. The airport’s high growth rate also makes it consistently increase its share of the total airport traffic in the Moscow area. In 2009, Vnukovo’s share was 18.9%. 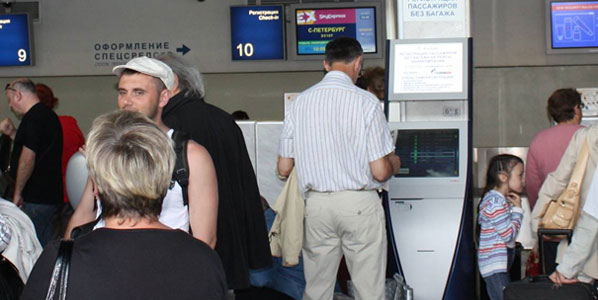 The low-cost carrier SkyExpress has grown to become Vnukovo’s second-largest airline, however, most other airlines at the airport grow at even faster rates.

Vnukovo is a major centre for business jets, which is the preferred method of travel for the many Russian oligarchs, and the airport even houses the presidential fleet. Other than this and cargo operations, it offers one of the largest domestic passenger networks among Russian airports. At 65 Russian airports served, only Domodedovo offers one more. 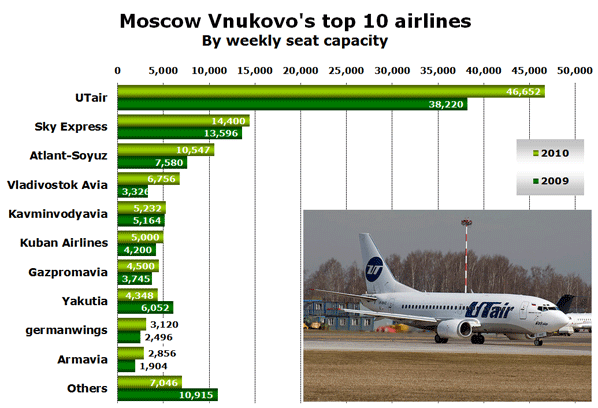 UTair is the dominant carrier with 42% of the airport’s seat capacity. Although the airline has grown by over 22% in the last year, it is not the only one. In the top 10, all airlines but Yakutia has expanded its Vnukovo capacity compared to last year. Vladivostok Avia has even more than doubled its presence at the airport.

Most airlines serving Vnukovo are Russian, with dominant domestic route networks. The only foreign airlines to make the top 10 are germanwings and Armavia. The German low-cost carrier serves Vnukvo from four airports; Berlin Schönefeld, Cologne/Bonn, Stuttgart and the latest addition Hannover. Of airlines from outside the CIS, Syrian Air is the only other carrier to serve Vnukovo.

With the new, state-of-the-art terminal, it is the hope of Andrey Sokolov, head of marketing and advertising, that the airport will attract more carriers from Europe. The Ukraine is one of key growth markets where the airport sees potential. In addition to the new facilities located close together in a compact solution, the airport’s selling points are its extensive domestic network with interlining opportunities and its location, close both to the centre of Moscow and in the right direction for Europe.