Finally, all major US airlines report year-on-year demand growth in May; load factors also up versus last year US Airways last week launched a new service, operated three times daily, between Philadelphia and Halifax. The service is operated by US Airways Express partner Air Wisconsin, using a 50-seat CRJ200. Of the tracked airlines, US Airways had the biggest RPM year-on-year fall in April, but the airline has recovered to report positive figures for May.

Last May, all nine of the biggest US airlines tracked (the big five ‘legacy’ carriers plus Alaska, AirTran, jetBlue and Southwest) reported a decline in demand (as measured by system RPMs – Revenue Passenger Miles). This May, for the first time in ages, all nine are likely to show year-on-year demand growth (though jetBlue and United have yet to report their figures). 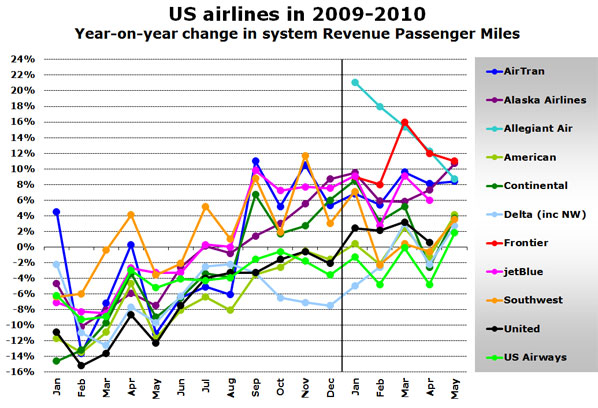 Dynamic Allegiant Air, which has been growing far faster at well over 20% in recent times, has seen its year-on-year RPM growth fall to a more modest 8.7% in May, a figure beaten by Alaska Airlines’ almost 11% growth. The volcanic ash cloud in April took a small toll on those legacy carriers with extensive transatlantic networks.

The ‘new’ Frontier (which consists of the old Denver-based Frontier and Midwest, both of which are now owned by Republic) has seen RPM growth averaging over 10% in the first five months of this year.

Almost all airlines see May load factors up versus 2009

Monthly load factors as reported by 12 US airlines have been plotted for the last 17 months to show how different airlines compare and what impact seasonality has on the airlines’ ability to fill their aircraft. 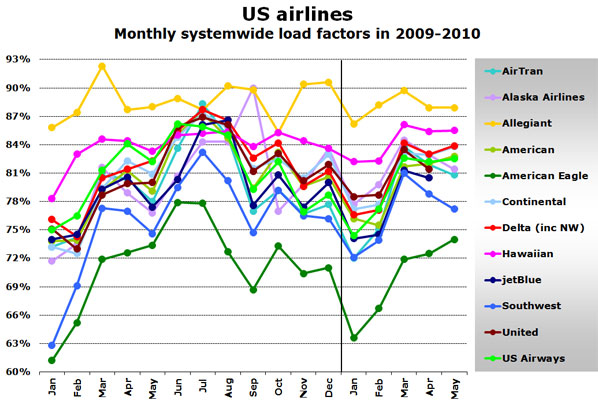 While no guarantee of improved revenues, all the carriers (with the minor exception of Allegiant) reported better system-wide load factors in May 2010 than they did in May 2009. Alaska Airlines was up 4.6 percentage points to 81.4%, while American was up 3.7 points to 82.8%. AirTran, Continental, Hawaiian and Southwest have all reported load factor improvements of between two and three percentage points in May. Only Allegiant’s aircraft saw a small drop in load factor from 88.0% last May to 87.9% this May. However, that still leaves it over two percentage points clear of its nearest rival Hawaiian Airlines. 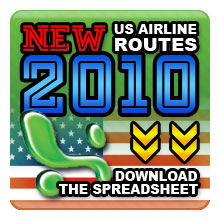 Republic Airways Holdings, which now owns and operates both Frontier and Midwest under the Frontier brand, reported that May load factors for the branded operation were up five percentage points from 80% to 85%.