The Swiss regional carrier Darwin Airline launched services from Rimini to Rome Fiumicino on 24 May, using a Saab 2000, in cooperation with Alitalia. The service is operated up to three times daily. An Italian focus is part of the airline’s strategic plans for 2010, as was detailed during the press conference held by Darwin Airlines' CFO Carlo Gatti and CEO Fabio Parini, as well as Andrea Tucci, Alitalia's VP Alliances and Network Agreements. Massimo Masini, President of Rimini Airport, joined to fly the Swiss flag in celebration of the route.

Rimini Miramare Airport, marketed under the name Federico Fellini International Airport, serves the coastal region around Rimini on the Adriatic coast, including the small country of San Marino. Passenger traffic at the airport is mostly international inbound leisure traffic heading for the beaches during the peak summer months. Annual passenger numbers were between 200,000 and 260,000 between 1996 and 2003, but since then, there has been growth with passenger numbers almost reaching half a million in 2007. Over one third of these passengers were from a single airport, Moscow Domodedovo. The region is extremely popular with Russian tourists and Rimini is twinned with Sochi, a resort city on the Black Sea. 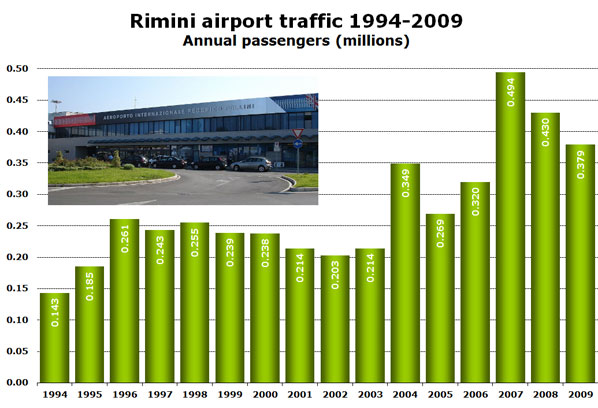 Demand is extremely seasonal with traffic levels in July and August between four and five times higher than during the off-peak winter season. So far in 2010, traffic levels are well above those achieved in 2007, but whether the airport can pass the 500,000 passenger mark in 2010 will depend on how popular the region is during the peak summer period. 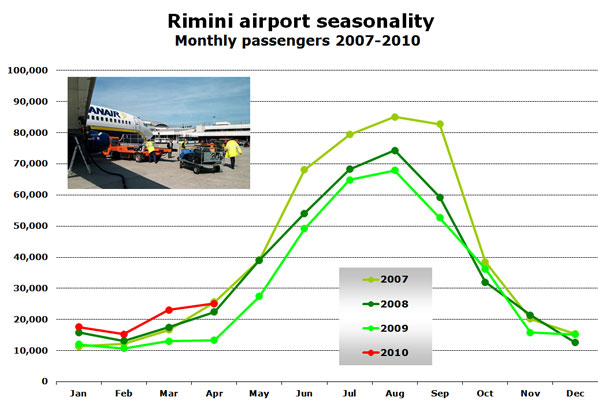 Since last summer, the airport has seen airberlin take over the Cologne/Bonn service previously operated by TUIfly.com, but not its Hannover and Munich flights. It has also started (or re-started in some cases) weekly flights to Amsterdam, Berlin Tegel, Hamburg, Münster/Osnabruck and Zurich.

Armenian flag-carrier Armavia has started weekly flights to Yerevan, but the most significant new route is probably that of Darwin Airline, which started flights to Rome Fiumicino on 24 May this year using a Saab 2000 in cooperation with Alitalia. The service operates up to three times daily. The only other scheduled daily flights at the airport are to Munich (twice-daily with Air Dolomiti) and Vienna (daily with Air Dolomiti).

Last summer, MyAir.com started services on 9 May to Amsterdam, Bucharest and Paris before suspending all operations at the end of July when the airline collapsed.

Big charter programme again this summer to Russia and Ukraine

According to the airport’s website there is a significant charter programme once again this summer from Russia and Ukraine.

For locals wanting a change of scenery there are summer charter flights to beach resorts in Croatia, Egypt, Greece and Sardinia, as well as ‘city’ destinations such as Amsterdam (with Transavia.com), Brussels (with Thomas Cook Airlines), Oslo (with SAS) and Paris (with Europe Airpost).