It is a busy time for launching transatlantic routes. At the European end, Air Canada was welcomed to both Athens and Barcelona this week, while Alitalia’s aircraft got a shower in Miami. When American Airlines’ JFK service touched down in Manchester, a yellow taxi was there to escort the aircraft.

This week saw the start of a significant number of new transatlantic routes including Air Canada’s new routes from Montreal and Toronto, to Athens and Barcelona; two new Alitalia routes; two new Iceland Express routes and Swiss starting non-stop flights between Zurich and San Francisco. According to our new route database we have identified at least 24 new transatlantic routes that have either already started, or will start, during the current summer season. These are summarised below.

Comparing OAG schedule data for the first week in August 2010 with that of 2009 reveals that transatlantic capacity (between Europe and US/Canada) is up 2.4% to an estimated 880,000 weekly one-way seats. Aircraft movements however are up just 0.5% suggesting the use of bigger aircraft or airlines taking out some of their first or business class capacity and replacing it with more economy seats.

One in four transatlantic passengers travelling between UK and US 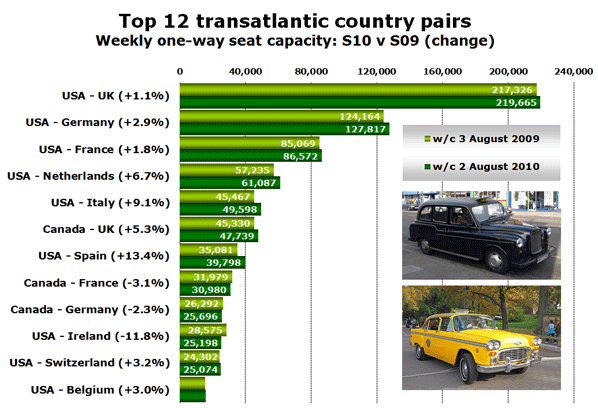 The 13% growth in the US to Spain market is helped by new daily services from American (to New York JFK) and United (to Washington). The US to Italy market is up 9% and apart from Alitalia’s two new routes there are also new daily flights to Rome offered by United (from Chicago) and Charlotte (US Airways).

The US – Ireland market has seen capacity cutbacks primarily by Aer Lingus. Last August the airline operated 54 weekly departures across six routes from Dublin and three from Shannon. This year that number has fallen to 40, with the removal of the Dublin – San Francisco, Dublin – Washington and Shannon – Chicago non-stop services.

Delta under threat from ‘new’ United?

The planned merger between Continental and United would result in the ‘new’ United offering similar transatlantic capacity as Delta (since its merger with Northwest). This would push British Airways and Lufthansa back into third and fourth places. 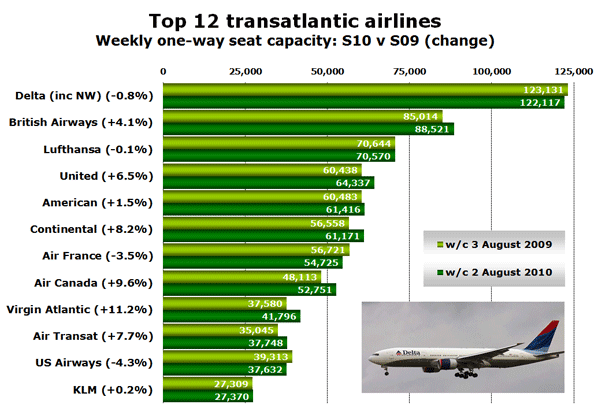 Air Canada’s capacity growth of almost 10% this summer is aided by the airline’s new routes to Athens and Barcelona (from both Montreal and Toronto) which started last week. Virgin Atlantic’s 11% capacity growth has been achieved without any new routes or any additional frequencies. Instead larger aircraft are being used on many of the airline’s 11 transatlantic routes to the US (eight from Heathrow, two from London Gatwick and one from Manchester).