In August, Brisbane-headquartered Virgin Blue will celebrate its 10th anniversary. For nearly all of that time it has been led by Brett Godfrey, who stepped down last month to be replaced by John Borghetti as CEO. Following the demise of Ansett in 2001, Virgin Blue was able to rapidly establish itself as the second biggest carrier in the Australian domestic market, following many of the principles established by low-cost carriers such as Southwest and easyJet.

Virgin Blue Holdings, which includes the Pacific Blue, Polynesian Blue and V Australia brands, reported passenger growth of 3% in April. While domestic demand was virtually unchanged (+0.5%), passengers carried on international flights was up almost 19% as capacity (ASKs) was up 42%. Between July 2009 and April 2010, international capacity (ASKs) has more than doubled (+131%) while domestic capacity has fallen 3.6%. As a result, although international passengers make up just 15% of the total, in terms of ASKs, international routes now account for 37.5% of the airline’s operations. In its financial year to June, the airline appears on track to transport around 18.5 million passengers, comprising just under 16 million on domestic flights and just under three million on international flights (not including Polynesian Blue operations). Virgin Blue currently operates 60 domestic routes in Australia, giving it a capacity market share of around 28%. In April, the airline launched a twice-weekly direct service from Perth to Christmas Island and a third weekly service via the Cocos (Keeling) Islands.

With a fleet of over 50 737s and 20 Embraer E-Jets, Virgin Blue currently operates 60 domestic routes in Australia involving 28 airports. This gives it a current capacity market share of around 28%, while Qantas (44%) and Jetstar (14%) combined have just over double that at 58%. Sydney, Melbourne and Brisbane are by far the three busiest airports for Virgin Blue and the top seven domestic routes account for over 45% of all the airline’s Australian domestic seats. 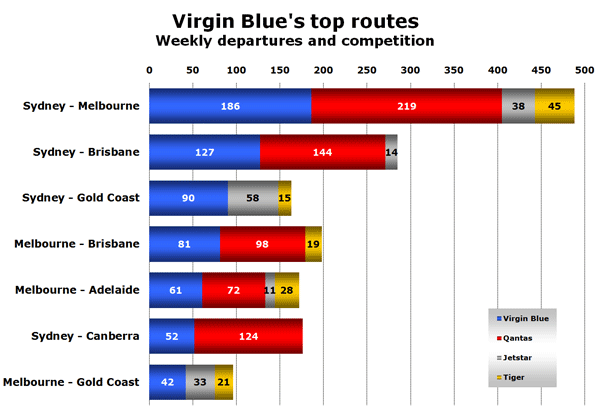 Of those top seven routes, Virgin Blue faces direct competition with Qantas on five, while Qantas’ low-cost subsidiary Jetstar also operates on five of the routes including the two leisure-oriented Gold Coast routes on which Qantas is not present. Tiger Airways is also present in five of the seven markets.

At the end of May, the airline reported a lowering of expected profit in the financial year ending 30 June 2010. The airline said, “Since the guidance given earlier this month, we have continued to see rapid deterioration and increased volatility in the operating environment, particularly in respect of the leisure segment both domestically and internationally. This is consistent with the weakening trend seen recently in the broader retail market as well as an unexpected and sudden decline in consumer confidence in the last month. The decline in demand has coincided with a period of increased industry capacity.” Revealingly, it still expects the “short haul business” to make a significant profit, suggesting that some of the international operations (mainly V Australia) are not delivering the hoped for financial returns at present.

Pacific Blue’s recent “Happy flying” TV advertisement is set to the tune of Los Del Rio’s 1996 global novelty hit “Macarena”. Play it once and have the tune going around your head for the rest of the day…