airberlin adds a dozen new routes from its Düsseldorf base; will serve 77 destinations this summer in 25 countries 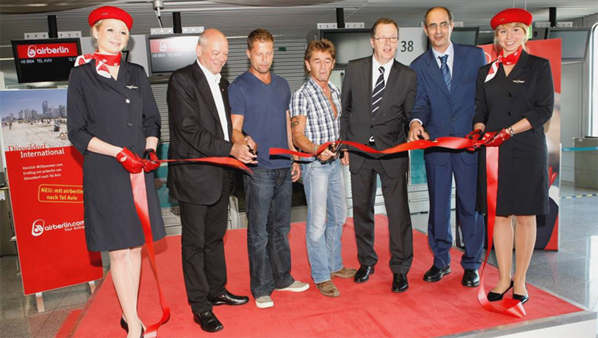 In the last week, airberlin launched two weekly flights between Düsseldorf and Tel Aviv. The airline offers more than 40% more seat capacity from the airport than closest rival Lufthansa this summer.

Last year, Düsseldorf International Airport handled 17.8 million passengers, down only two percent from the previous year. This makes it Germany’s third busiest airport after Frankfurt (50.9 million) and Munich (32.7 million). Unlike these other two airports where Lufthansa is the dominant carrier, in Düsseldorf, the national carrier faces stiff competition from airberlin, which this summer will serve 77 destinations non-stop from the airport. While airberlin offers more destinations and more seat capacity, Lufthansa operates more flights due to its focus on using smaller aircraft.

airberlin has managed to establish such a formidable presence at the airport thanks to its acquisition in the past few years of dba (which operated some key high frequency domestic routes), and LTU whose aircraft are used on the longer-haul destinations.

airberlin’s eight domestic routes and 15 routes to Spain account for half of the airline’s operations in Düsseldorf. Berlin Tegel and Munich are the biggest routes with 46 and 52 weekly departures respectively, while the airline’s virtual hub at Palma de Mallorca is served with 38 weekly flights this summer, accounting for around 40% of airberlin’s Spanish capacity at Düsseldorf. 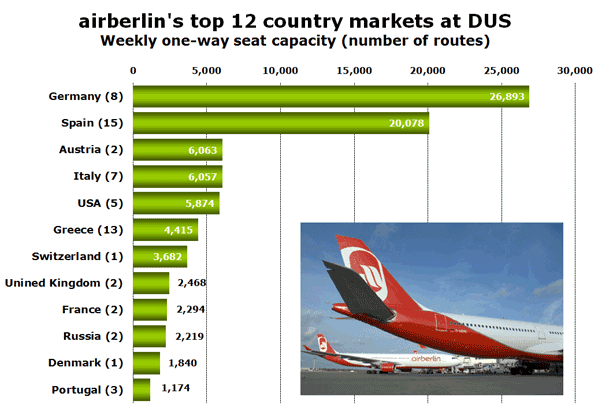 12 new routes added for this summer

Since last summer, airberlin has added 12 new routes to its Düsseldorf network, raising the total to 77. The newest routes are summarised in the table below.

Meanwhile, just up the road …

It may be around 70 kilometres from the city of Düsseldorf, but Weeze Airport is now a major Ryanair base. It recently celebrated its third birthday as a base and last year handled 2.4 million passengers. This summer, Ryanair will be operating to more than 50 destinations across Europe from the airport which is close to the Dutch border.