Atlanta airport still busiest in the world; Delta dominant with 75% of passengers; no sign (yet) of jetBlue or Southwest 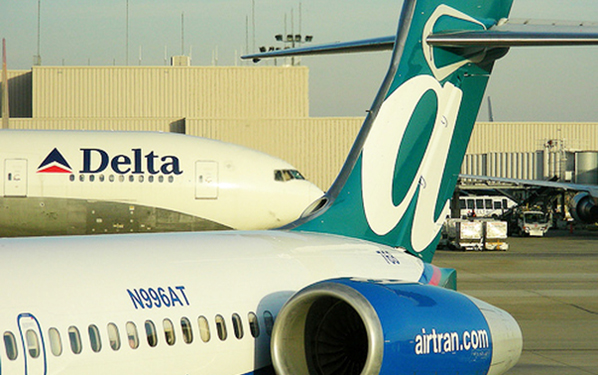 Both Delta and AirTran have hubs at Atlanta and the two airlines account for almost 94% of all scheduled capacity at the airport. Delta’s hub is the largest of any airline in the world and its dominance is highlighted by the fact that its branded flights carried almost three-quarters of all passengers from Atlanta in 2009.

Atlanta may be the home of famous corporations such as AT&T, Coca-Cola and CNN, and the venue for the 1996 summer Olympics, but in the air transport community it is best known as the world’s busiest airport (over 88 million passenger movements in 2009) and the biggest hub of Delta. Whether it becomes the first airport to ever handle 100 million passengers in a year remains to be seen with Beijing making such rapid strides. Delta’s hub at the airport is the largest hub of any airline in the world. During the last decade annual passenger numbers have edged up from around 80 to 90 million. Apart from Delta, the low-cost carrier AirTran also has a major presence at the airport. Traffic in the first four months of 2010 is up less than 1% according to airport statistics. 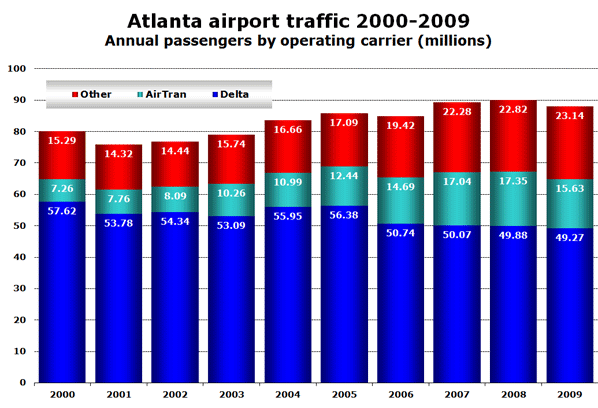 Looking at the above graph would suggest that Delta’s dominance at the airport is waning, but the data shows passenger numbers by operating carrier. A significant share of Delta’s capacity at Atlanta is operated by other carriers such as Atlantic Southeast Airlines, Comair, Pinnacle, Shuttle America and Skywest. Thus the number of passengers carried on Delta branded flights at Atlanta in 2009 was actually 65.73 million, or 74.7% of the total.

Based on schedule capacity data for June 2010, Delta (76.9%) and AirTran (16.8%) account for almost 94% of all scheduled capacity. Fifteen other carriers account for the remaining six percent with the other US legacy carriers all having a minor presence, as well as Alaska Airlines (one daily flight to Seattle), Frontier (three daily flights to Denver) and Spirit (also three daily flights)

Orlando is leading destination; competition on all leading routes

As might be expected at a major hub, no one route dominates, but at least during the summer season Orlando leads the way, followed by Dallas/Fort Worth and New York LaGuardia. AirTran and Delta compete head-to-head on each of the top 12 routes with at least one other carrier present on six of the routes. 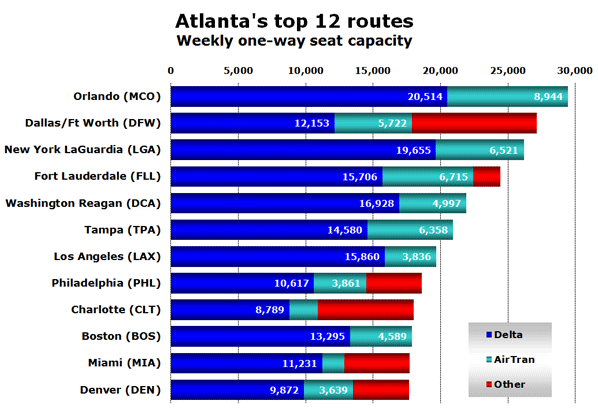 New domestic services started since the beginning of last June include AirTran to Allentown, Atlantic City, Gulfport-Biloxi, Harrisburg, Portland (Maine) and Tunica; Alaska Airlines has begun daily flights to Seattle; Delta has added Muscle Shoals, Northwest Florida Beaches and Tupelo; and Spirit has added Myrtle Beach. However, during the same period, AirTran has cut Charleston and Newark from its network, while Delta has cancelled services to Lincoln, Madison, Peoria and Scranton.

Last year, 8.83 million passengers were on international flights, representing just over 10% of the airport’s total traffic. A total of 50 countries are served non-stop by flights from the airport with Mexico the most popular by some distance. European countries (highlighted in dark green), take five of the top 10 places led by Germany. There are five daily non-stop flights between Atlanta and Germany, four operated by Delta (to Düsseldorf, Frankfurt, Munich and Stuttgart) and one by Lufthansa (to Frankfurt). 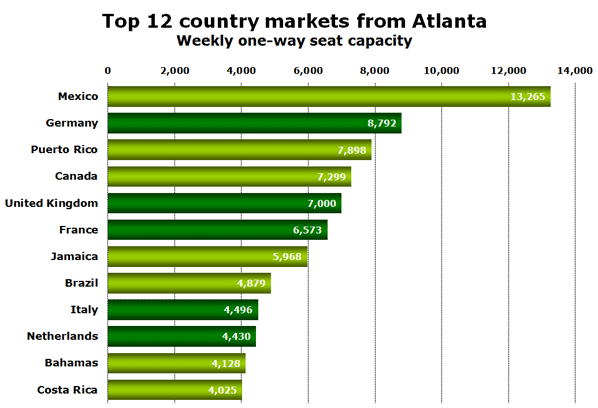 Source: OAG Max Online for w/c 7 June 2010 NB: According to OAG San Juan (SJU) is in the country of Puerto Rico not The United States.

Among foreign carriers, Air Canada operates 33 weekly flights to Toronto, while Air France, British Airways, KLM and Lufthansa all serve their home hubs in Europe on a daily basis, and Korean Air flies daily to Seoul Incheon. New international services started during the last 12 months include new non-stop routes to Accra (in Ghana) and Brasilia (both with Delta), and Montego Bay and Nassau (both with AirTran). However, direct flights to Kuwait, Seoul and Shanghai operated by Delta have all been terminated during the last year.