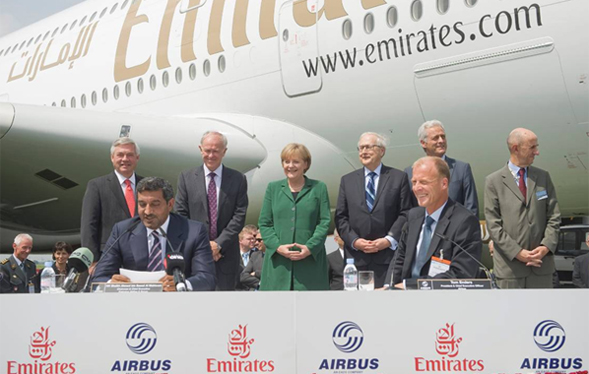 With a further 32 A380s on order, Emirates is destined to grow its network even faster. A delighted German Chancellor Angela Merkel (centre) even graced the event with her presence, as the chairmen and CEOs of Emirates and Airbus, Ahmed Bin Saeed Al-Maktoum and Tom Enders (who was made honorary graduate of Cranfield University on 11 June), announced the order.

Since anna.aero last looked at the “Middle East Big 3” (MEB3) airlines of Emirates, Etihad and Qatar Airways back in March, there have been several new route launches. Emirates has added Amsterdam and Tokyo Narita non-stop, Qatar Airways has added Ankara, Barcelona, Copenhagen and upgraded Seoul Incheon from a one-stop service to non-stop. It has also added Tokyo Narita as a one-stop service via Osaka Kansai. Finally, Etihad has added two destinations in Iraq (Baghdad and Erbil) and Tokyo Narita.

Other routes so far announced by the MEB3 carriers which are scheduled to start before the end of this year are: