Hellenic Imperial Airways Chairman and CEO, Talal Abureyal, offers a good luck handshake to Otto Rehhagel, the coach of the Greece national football team ahead of their departure to South Africa for the FIFA World Cup. The Greek airline this week introduced scheduled services between Athens and Johannesburg just in time for the start of the sporting showpiece.

With the FIFA World Cup getting under way in South Africa this week (the host nation drew its first match 1-1 against Mexico), the demand for air travel to and from the country from many of the participating nations is likely to see a surge in June and July. Since anna.aero last looked at the South African air travel market, the country has seen demand fall at all three of the major airports, although passenger numbers in 2009 were still above those reported in 2006. At OR Tambo International Airport in Johannesburg, domestic demand accounted for around 53% of traffic last year, while at Cape Town and Durban the figures are 82% and 98% respectively. The old Durban airport, which had been used since 1951, was recently replaced by an all-new airport (King Shaka International Airport) which opened on 1 May 2010 when all flights from the old airport were moved to the new facility. 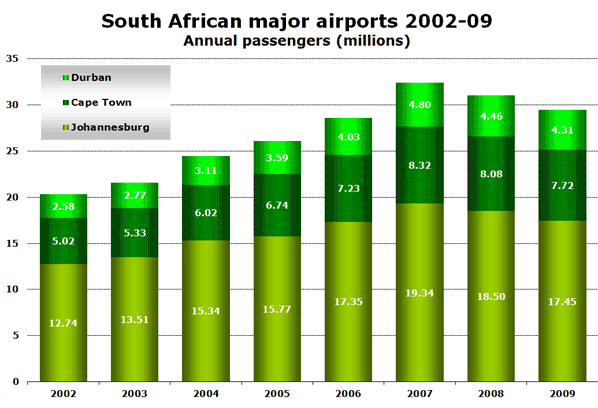 Passenger traffic at the country’s airports had grown rapidly between 2002 and 2007 thanks to the introduction of low-cost carriers into the domestic market. Comair (which operates as a British Airways franchise on domestic routes) set up kulula.com which began flying in 2001. 1time began operations in February 2004 while SAA finally launched its own low-cost subsidiary Mango in November 2006.

UK being caught by UAE as leading country market 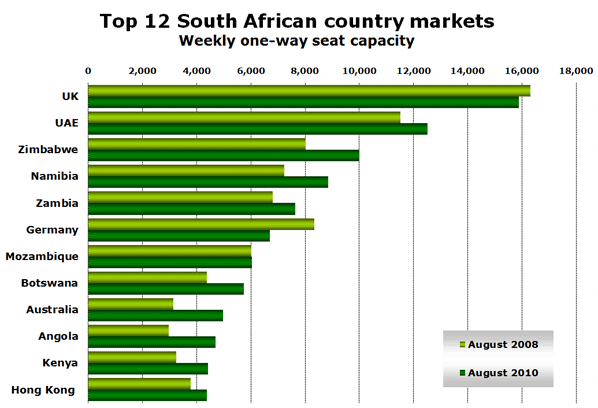 However, the United Arab Emirates is gaining fast thanks to Emirates serving all three major South African airports daily from Dubai, while Etihad also serves Jo’burg daily from Abu Dhabi. Other major non-African markets are Germany, Australia and Hong Kong. The Australian market has benefited from the arrival in March of this year of V Australia’s twice-weekly flights from Jo’burg to Melbourne to compete with SAA’s service to Perth and Qantas’ almost daily service to Sydney.

Among the 48 countries served non-stop from South Africa is the US, which has Delta operating nine weekly flights to its Atlanta hub. The non-stop US service has just celebrated its first anniversary having started on 1 June 2009. Another high profile international newcomer was Jet Airways which started daily flights to Mumbai on 14 April of this year. SAA already operates this route with four weekly flights. 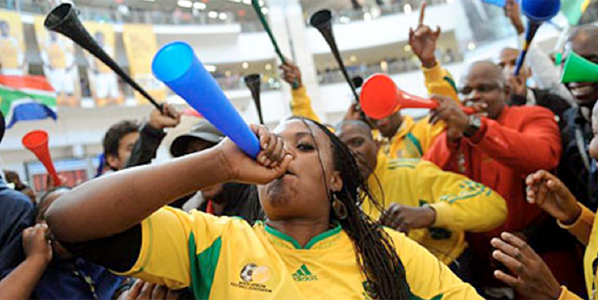 South Africa’s major airports have been more like carnivals over the course of the last week, as fans continue to arrive for the FIFA World Cup. In total, more than 450,000 international visitors are expected to embark on the country during the month-long tournament.

In the domestic market, SAA operates almost 60% of all flights but only 45% of all seats (not including its Mango subsidiary). Despite intense competition on the key trunk routes such as Johannesburg – Cape Town, Johannesburg – Durban and Cape Town – Durban, the airline has a monopoly on many of the smaller domestic routes.

All of the “others” capacity is provided by Middle East and Asian carriers operating onward connections between Cape Town and Johannesburg. A total of 16 airports in South Africa have scheduled services with SAA providing at least double-daily flights to Johannesburg from all of them.

Not surprisingly, during the current World Cup, SAA is operating some additional domestic services to help fans follow their teams around the country. Several foreign carriers are also operating one-off flights to Johannesburg or Cape Town to bring fans into the country for the event. Lufthansa even used the event to operate its first commercial A380 service from Frankfurt on 6 June to deliver the German team to the tournament. This experience has clearly benefited the team as they thrashed Australia 4-0 in their first group game.