Sun Country Airlines was one of many US carriers to launch a new route in the last week. The leisure-oriented carrier flies the atypical route between Minneapolis/St Paul and London Stansted with a 737-800. Meanwhile, Delta has expanded its long-haul network out of Seattle, Alaska Airlines’ primary base, as was celebrated in Osaka by Jeff Bernier, MD Sales and Affairs Asia Pacific. For domestic routes, the airline’s primary hub in Atlanta dominates the US market.

The last week has seen US airlines launch over 30 new routes, the majority of which are in the domestic market. As shown in last week’s US trendwatch feature, all the major US carriers finally reported year-on-year demand growth in May suggesting that this year may be financially rather better for them than the last couple. While the five major legacy carriers (soon to be four when Continental and United merge) and Southwest account for around 83% of domestic seat capacity, there are a number of well-known carriers that also play a role in the domestic market. 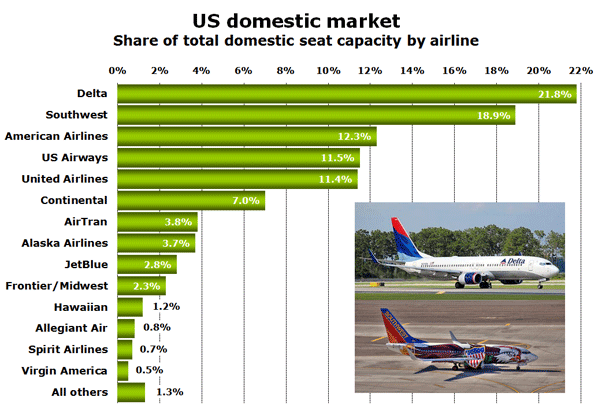 Maybe surprisingly, the combined Continental and United networks would still only rank third in the US domestic market with 18.4%, well behind Delta and Southwest. On the other hand, a merger between American and US Airways would give the combined entity a market leading 23.8%. To give a sense of the size of the US domestic market, Virgin America currently operates a fleet of 28 narrowbody Airbus aircraft on a purely domestic route network (until it starts Toronto flights on 23 June) and yet accounts for just half of one percent of US domestic seat capacity.

Among the more significant route launches this week was Delta’s decision to take on American and United on the New York LaGuardia to Chicago O’Hare route. American and United already each operate over 100 weekly departures between the two airports, but Delta (thanks to partner Shuttle America) has added a further 70 weekly flights into the market. The flights will be operated using Embraer 175s and will replace the previous lower frequency service between LaGuardia and Chicago Midway where the airline competed head-to-head with Southwest. Another major route launch was the airline’s foray into the Los Angeles – San Francisco market (with four daily flights). The key intra-Californian route is already hotly contested by American Airlines (42 weekly flights), Southwest (73 weekly flights), United (103 weekly flights) and Virgin America (41 weekly flights).

Most of American’s new routes are operated by American Eagle and are hub feeding services at Chicago O’Hare or Dallas/Fort Worth. One exception is a new daily service linking O’Hare to Vancouver, a route already served five times daily by United. Several of United’s new routes appear to be more based on meeting point-to-point leisure demand with new seasonal services from both Denver and San Francisco to Anchorage, Washington Dulles to Quebec City in Canada, and Washington Dulles to Colorado Springs. 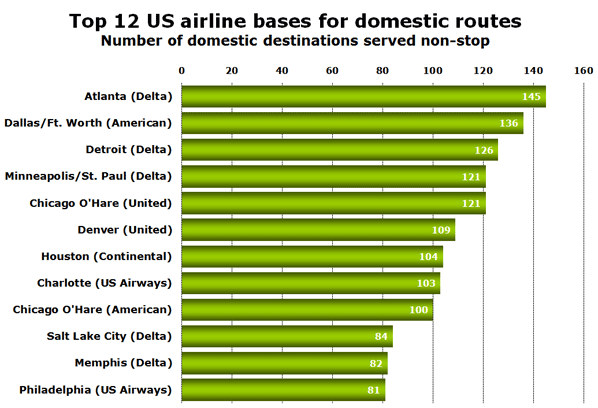 Most unexpected route of the week: Sun Country to London Stansted?

However, the prize for the most unlikely new route from a US carrier this week surely has to be Sun Country’s new weekly service from Minneapolis/St. Paul to London Stansted (via a technical stop in Gander, Canada) using a 162-seat 737-800. Fares start from $399 and are presumably targeted at the US rather than the UK market. Flights depart the US on Friday afternoon, arriving in the UK on Saturday morning. Return flights depart Stansted at noon on Sunday, arriving back in Minnesota at 16:55. This allows the flight crew sufficient time to recover before operating the return leg as well as permitting travellers a brief 24-hour stay in the UK if they so desire.