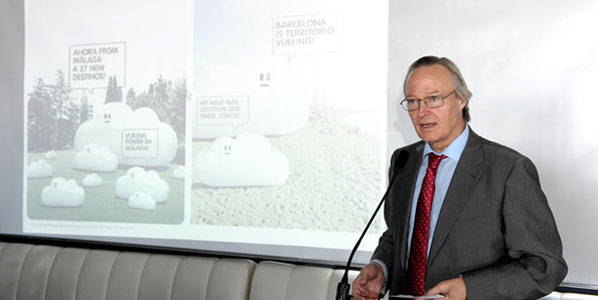 Set for a launch on July 5, Vueling’s chairman, Josep Pique, explains that its “connects” strategy will double the number of passengers using Barcelona as a real connection hub to 250-350,000 this year, and exceed one million by 2011. The hub targets Italians, French, Dutch and central Europeans en route to Spanish destinations as well as other international cities such as Tel Aviv, Amman and Istanbul. “Excellent” baggage handling facilities at the new Terminal 1 were cited as one of the key factors contributing to the viability of the project.

Spanish airport traffic grew by 8.7% in 2007 before falling 3.2% in 2008. In 2009, it fell a further 8.1% to 187.3 million passengers. Although things have improved in 2010, the (relatively modest) impact on traffic of the Icelandic volcanic eruption in April means that overall traffic is up just 0.4% in the period January through May. None of the leading mainland airports have reported any extreme results with most airports reporting year on year traffic changes of between minus five percent and plus 10 percent (apart from in April). 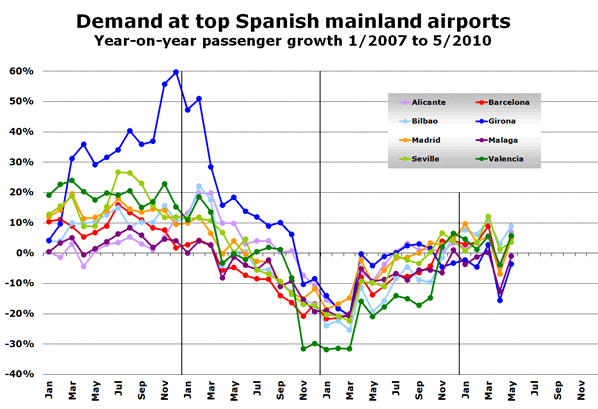 Looking at how demand for specific airlines compared between May 2010 and May 2009 reveals that Ryanair has seen passenger numbers passing through Spanish airports surge by almost 37%. As a result of this, it is rapidly catching Iberia and could soon become the leading airline in Spain, given the major route expansion already announced for Malaga (later this month) and Barcelona (in November).

Among the top 15 airlines, the only other airlines reporting year-on-year growth are airberlin (+6.8%), easyJet (+1.8%), Lufthansa (+12.5%) and the ‘new’ Vueling (+11.3%). The poor year-on-year performance of several UK and German charter/hybrid carriers is worth noting. 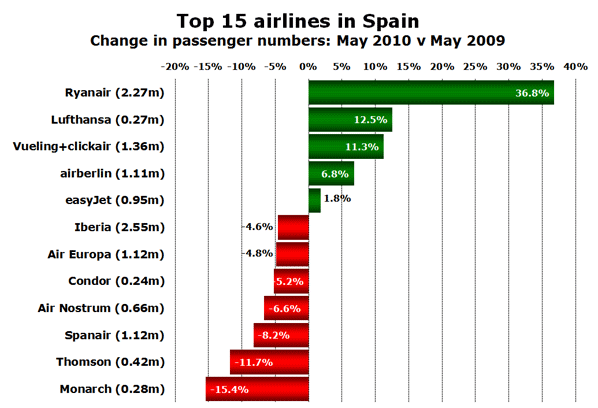 Although overall airport growth may be less than 1% so far this year, 11 of the top 15 airports have reported traffic growth with Ibiza and Bilbao leading the way, with both airports seeing demand growth of over 7% compared with the same period last year. 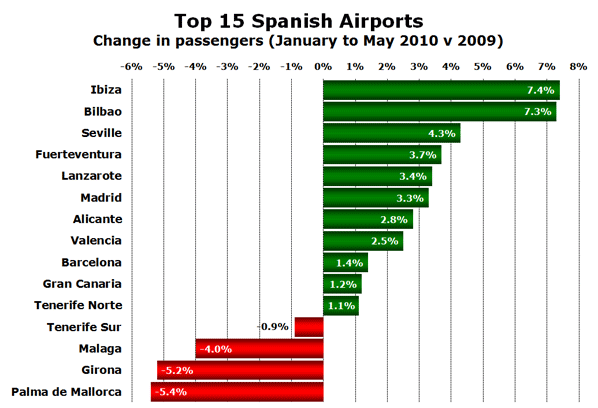 Girona, Malaga, Palma and Tenerife Sur are the only airports reporting a downturn in traffic among the top 15. Ryanair’s expansion at Malaga will likely generate growth at the airport, but the airline’s new base at Barcelona El Prat in November suggests that Girona’s traffic may well have peaked, at least in the medium term.