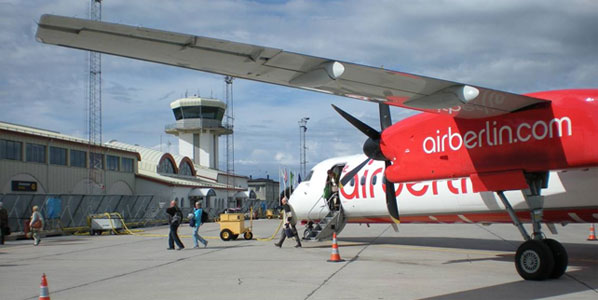 Last Saturday, airberlin began its weekly Q400 flights to Visby from Berlin Tegel. This follows launches by both SAS and airBaltic in the last few weeks, which greatly have expanded the airport’s network. (Photo: Henrik Söderberg, Swedavia)

Visby Airport serves the Swedish island of Gotland in the Baltic Sea, which is something of a Swedish Riviera, attracting large numbers of tourists in summer. At a passenger throughput of 304,714 in 2009, the airport ranks as the eleventh biggest in Sweden. With Gotland being an island, the only transport alternative to air services are ferries. 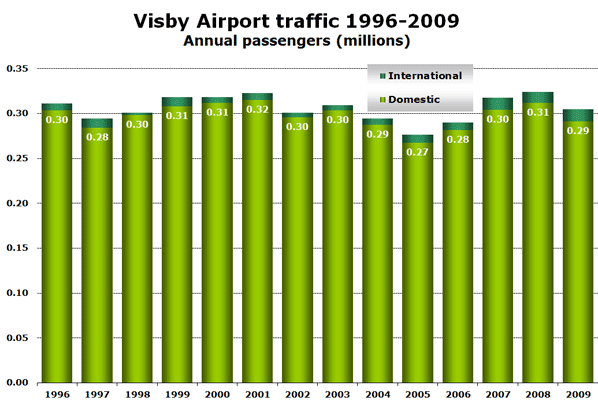 Although passenger numbers were record high in 2008, last year’s throughput fell by 6% and was lower than passenger figures back in 1996.

Domestic passengers hugely dominate, although international traffic has increased over the last three years, now reporting figures twice as high as in the beginning of the 2000s. 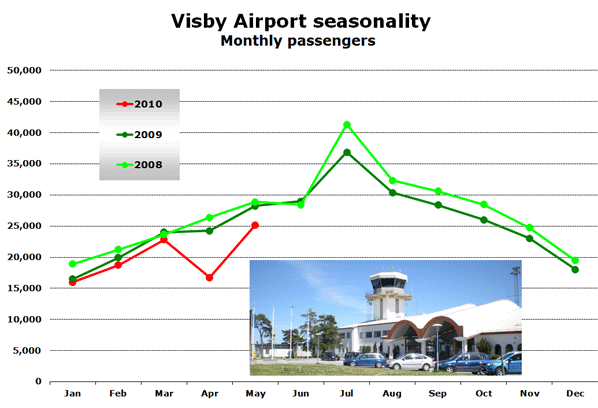 Visby’s peak takes place in July, the primary holiday month in Sweden. The medieval, hanseatic city also hosts several annual events during the month, one which attracts the Swedish political elite and media during one week, while young members of the price-insensitive Swedish upper class also gather on the island for a week.

So far this year, the falling trend has continued and the Icelandic volcanic ash cloud resulted in a 31% traffic fall in April on last year’s figures.

With the potential to rectify the falling traffic, ahead of the peak summer season, three new routes have launched in the last few weeks. airBaltic began three weekly Fokker 50 operations from Riga on 4 June and this week saw the launch of airberlin’s weekly Q400 flight from Berlin Tegel.

SAS, which last flew to Visby in 2001, instantly has become the airport’s third largest carrier with its daily 737-600 flights from Stockholm Arlanda that were launched on 6 June. 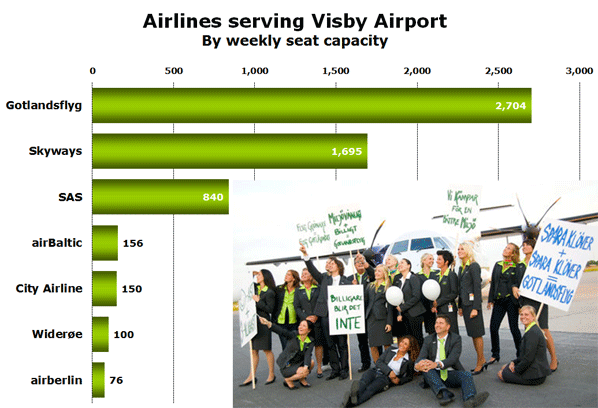 The dominant carrier at Visby is Gotlandsflyg, a local virtual airline that forms part of the bigger Sverigeflyg. Operations are performed by Avitrans Nordic’s Saab 340 and Golden Air’s ATR72-500.

Although the domestic network hugely dominates at Visby, airBaltic and airberlin do not offer the only international flights. During the peak season, Gotlandsflyg serves both Helsinki and Hamburg, while Widerøe flies from Oslo. Each of the three routes operates twice a week.