German airport traffic up 7.3% in May; Memmingen and Weeze lead the way; new government tax not welcomed 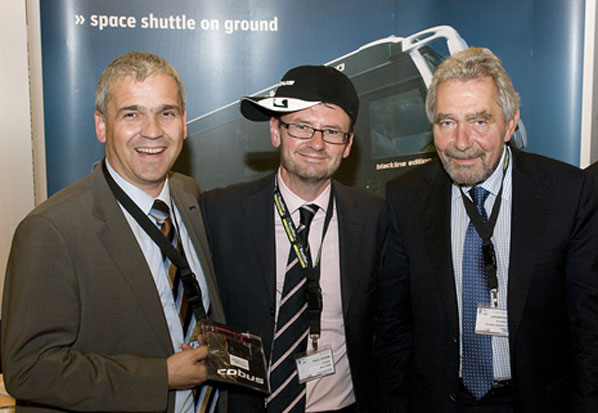 Ralf Schmid (left) the managing director of Memmingen/Allgäu airport near Munich which saw a 24% surge in May. anna.aero estimates that the proposed new German tax on departing passengers will be about €11, severely curtailing this otherwise encouraging economic activity. The negative economic impact will also fall to companies like Jürgen Kamps’ (right) CONTRAC which has supplied a lot of buses to Memmingen since it opened three years ago. (Memmingen’s third birthday is shared by anna.aero, an event celebrated here by its publisher, Paul Hogan, centre.)

Despite the disruption caused by the Icelandic ash cloud in April, Germany’s major airports have registered a small growth (plus 0.4%) in total passenger traffic in the first five months of 2010. Year-on-year traffic has been growing since last November with the obvious exception of this April. In March, passenger numbers were up 9.1% and in May the figure was 7.3%. 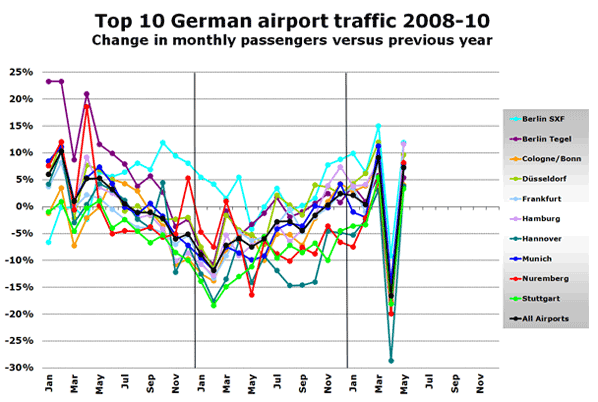 Among the top 10 airports, Berlin Schönefeld reported the best performance with demand up 6.7% in the January to May period, followed by Düsseldorf (+3.4%) and Hamburg (+2.4%). Hannover’s figures should soon reflect the impact of the new Germanwings base which opened at the end of April. Despite this, Hannover’s traffic was up only 3.8% in May, well below the national average.

Among smaller German airports Weeze (near Düsseldorf) has reported year-to-date growth of 19.9% thanks to Ryanair’s on-going network expansion there while in May its passenger numbers were up 32.5%. Memmingen airport near Munich is also seeing rapid passenger growth and reported a 24% surge in passenger numbers in May.

New tax to help or hinder the German economy?

In early June, the German government announced plans to introduce a new tax on all departing passengers from German airports with the aim of generating around one billion Euros per annum to help plug the country’s deficit. Given that Germany’s airports handled around 180 million passengers last year, that would indicate an average tax of around 11 Euros per departing passenger (assuming that 50% of German airport passengers are departing). Needless to say, low-cost carriers have already registered their outrage at such a decision, while even IATA members have complained loudly. In a statement made on 8 June, IATA’s Director General Giovanni Bisignani said: “Even as a cash-grab, the proposed tax makes no sense. The Dutch government tried to raise 300 million Euros with a similar tax. It cost the Dutch economy 1.2 billion Euros in lost business. It also failed as an environmental measure, sending travelers across the border to start their journey from more tax-sensible regimes. The Dutch had the good sense to repeal their tax. Why repeat past mistakes?” Because the industry has not invested enough in communicating this message effectively?