Ryanair doubles network at Malaga as airport becomes a base; direct competition on 16 of 43 routes Ryanair’s Lesley Kane, Head of Sales & Marketing Europe, and Salvador Pendón, president of the Costa del Sol tourist promotion agency, wave the Andalusian flag over Ryanair’s new base. The past week’s 22 new route launches should mean Ryanair leapfrogs easyJet to become the leading carrier in 2010 with 43 destinations at the airport, served with an average frequency of just three per week.

Ryanair’s apparent inexorable march towards being the biggest airline in Spain took another step forward this week with the launch of a base and 22 new routes from Malaga airport. Although Ryanair was already the airport’s second biggest airline in 2009 with almost 1.2 million passengers, this was achieved by serving the airport from 17 of its existing bases across Europe. Apart from the 22 new routes started this week, Ryanair had already launched new routes earlier this year from four additional bases in Bologna, Cork, Leeds/Bradford and Oslo Rygge. As a result a total of 43 destinations will be served this summer by Ryanair from Spain’s fourth-busiest airport after Madrid, Barcelona and Palma de Mallorca. This should ensure that Ryanair leapfrogs easyJet to become the leading carrier at the airport in 2010. The 43 routes are spread across 13 foreign countries as well as six domestic routes. Out of the 211 weekly departures, 72 are spread across nine UK airports, 27 are to Irish airports, 25 to other Spanish airports and 24 across five German airports. 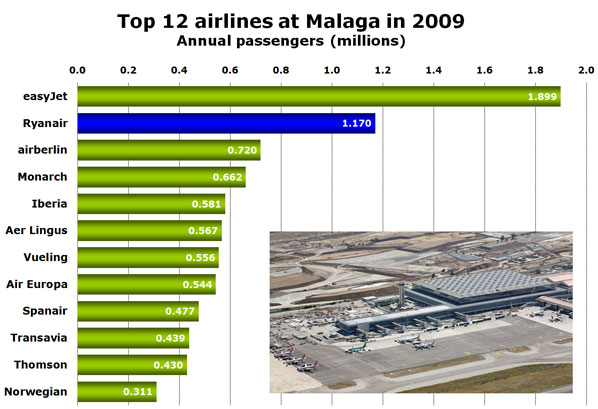 The 22 new routes will add a total of 67 new weekly departures, an average of just three per route. Only Eindhoven and Valencia receive as many as five weekly flights, while six routes will be served with just two weekly frequencies.

Unusually for a Ryanair base, the airline will face direct head-to-head competition on 16 of the 43 routes it will operate this summer. Of these 16 routes, 10 were existing services while six were among the routes launched this week (Berlin, Billund, Eindhoven, Santander, Santiago de Compostela and Valencia). Seven of the routes are to the UK where the airline competes with the likes of bmibaby, easyJet, Jet2.com, Monarch and Thomson.