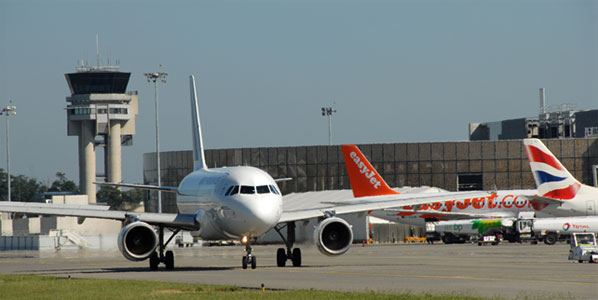 Toulouse-UK traffic has had a good century thus far – almost doubling in the middle of the decade as a result of developing several links to UK regional airports before finding a more settled level in the second half.

Spending an unexpected night at easyJet’s expense at the Holiday Inn Express at Toulouse Airport (thanks to a French national strike which impacted air services across all French airports last Thursday) inspired anna.aero to examine the history of air traffic services and demand between the UK and the home of Airbus. Between 1998 and 2001, annual demand hovered around the 350,000 passenger mark but has since grown and been rather more volatile with the introduction (and axing) of a number of services from regional airports in the UK. 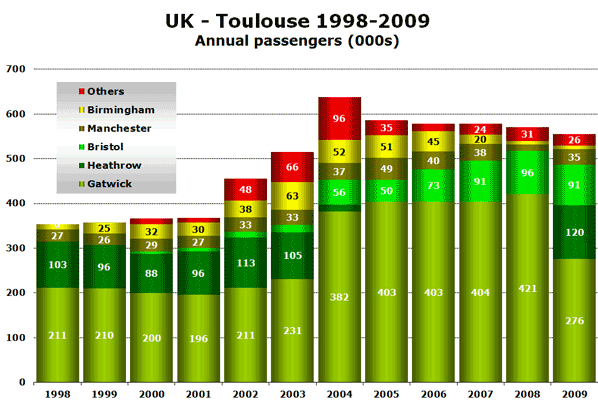 Apart from London services (mostly from Gatwick until British Airways recently relocated their Gatwick flights to Heathrow), the next busiest route in recent years has been to Bristol, another major centre for Airbus production. Originally, the scheduled service was operated by Flybe, but easyJet started flights in July 2006 and Flybe dropped the route.

Additional UK scheduled services this summer from outside London consist of Flybe’s weekly service from Birmingham, bmibaby’s three weekly flights from Manchester and Jet2.com’s weekly flights from Edinburgh and Leeds/Bradford. The peak in 2004 corresponds to when several other UK airports were generating traffic to Toulouse. This included bmibaby flights from both Cardiff and East Midlands, as well as daily Flybe services from Southampton, which started in May 2003 but ended in early 2005.