Aegean adds its 28 international and 26 domestic routes to the Star Alliance network. Lufthansa’s Wolfgang Mayrhuber led alliance member CEOs in witnessing the symbolic model aircraft presentation by Aegean CEO Theodore Vassilakis to Star CEO Jaan Albrecht in what was a suitably modest joining ceremony, contrasting to past parties thrown at the Pyramids by Egyptair and Grand Place by Brussels Airlines.

The last few weeks have seen three airlines join one of the three global airline alliance groupings. Tarom and Vietnam Airlines joined SkyTeam while last week Aegean Airlines officially became a member of the Star Alliance. As a result, 52 of the world’s airlines are now members of one of the alliances with several more carriers such as Air India (Star), China Eastern (SkyTeam), Kingfisher (oneworld), Olympic (Star) and S7 (oneworld) expected to join in the next 18 months. The Star Alliance currently has more members (28) than the other two alliances put together and believes that ultimately it may have as many as 50 member airlines.

Almost half of all alliance member airlines are based in Europe where competition is provided on intra-European services by a variety of low-cost and hybrid airlines. Analysing scheduled capacity at European airports reveals that only two of the top five airlines in Europe (Lufthansa and Air France) are alliance members, with ‘independent’ carriers Ryanair (first), easyJet (third) and airberlin (fifth). 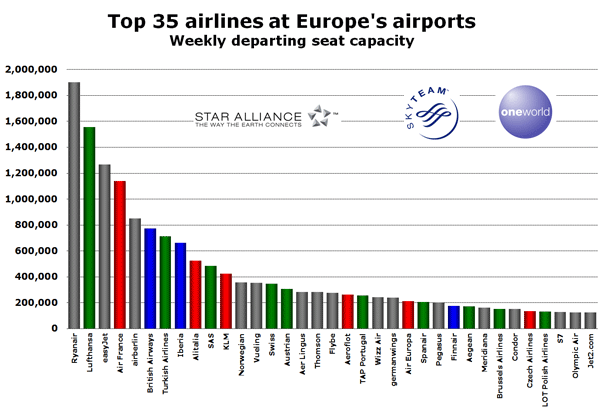 Aegean is ranked 27th in Europe and thus now gives Star (in green) its 10th airline member in the top 35. SkyTeam (in red) has six airlines in the top 35 in Europe (though not recent addition Tarom who rank only 57th in Europe) while oneworld (in blue) has just three members in the top 35, with Malev ranked just 42nd.

Excluding low-cost and hybrid airlines, the biggest ‘traditional’ airline that is not yet an alliance member is Meridiana, ranked 28th, one place behind Aegean. Future alliance members S7 and Olympic are ranked 33rd and 34th. Ranked just outside the top 35 is Delta, which is the leading non-European based airline operating in Europe (and a SkyTeam member).

Among the top 35 airlines, Star members have a 28% share of seat capacity, SkyTeam members have 17% while oneworld carriers have just 10%. That leaves 45% of capacity among the leading airlines provided by non-aligned carriers.