Wind Jet’s most recently launched route, from Forlì to Tallinn, began on 30 June and adds to the airline’s existing destinations in northeast Europe; Riga, St Petersburg, Moscow and Samara.

With the collapse last year of MyAir.com, and the disappearance of the Volareweb brand as part of its integration into the ‘new’ Alitalia, Italy has arguably just two remaining home-grown low-cost carriers, Blu-Express and Wind Jet. The latter, which is based in Sicily, has been operating scheduled services since June 2003. Now with a fleet of seven 180-seat A320s and five 144-seat A319s (and two Piaggio P180s for executive business travel), the airline operates a mix of scheduled and charter services and last year carried over 2.5 million passengers. Last week, the airline introduced a new weekly service between its base at Forli (near Bologna) and Tallinn in Estonia, becoming the only Italian carrier to link these two countries. 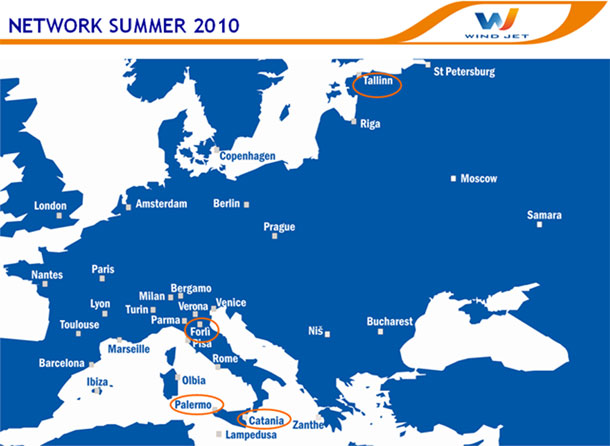 Focus on domestic routes between Sicily and Rome 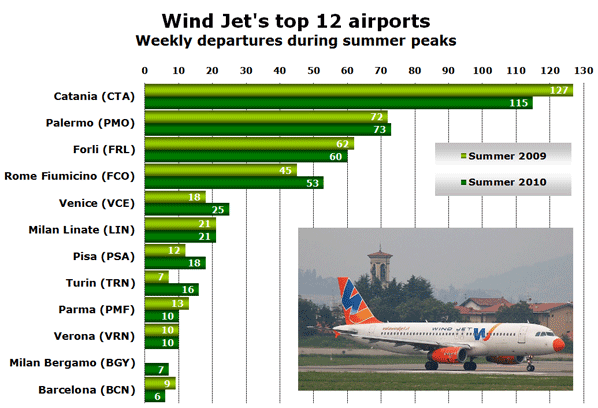 All international routes are served with just one or two weekly flights, except for Barcelona which is served with three weekly flights from both Catania and Palermo. As a result, the Spanish airport just makes it into the list of top 12 airports based on scheduled frequency.

A total of 20 international destinations are currently served with scheduled services; five in France, three in Russia, two in Spain, and one each in the Czech Republic, Denmark, Estonia, Germany, Latvia, Greece, the Netherlands, Romania, Serbia and the United Kingdom.

Unusual operations in France and flights to Niš in Serbia

One of the airline’s more unusual destinations is Niš (INI) in Serbia, which is served twice weekly from Forli. The Wind Jet service is one of only two scheduled services at the Serbian airport, the other being a daily flight to Podgorica in Montenegro.

Wind Jet’s non-Paris French routes are also something of an oddity. Since 9 April, this year the airline offers weekly (Friday) flights that operate Catania – Lyon – Marseille – Catania, and Catania – Nantes – Toulouse – Catania. The same routings are offered from Palermo. All of these routes are operated as code-share flights with XL Airways France who also operate some of the flights.

The airline’s next new scheduled destination is Sharm El-Sheikh in Egypt which it plans to launch in December. The carrier has offered charter flights to Northern Africa for several years and sees this as an area of potential growth.