Long Beach Airport, located around 30 kilometres south-east of Los Angeles International Airport, is a so-called ‘focus city’ for New York based JetBlue, which first started serving the airport in 2001. For the last five years, JetBlue has been responsible for transporting between 75% and 80% of all passengers through Long Beach’s stylish art deco terminal. Partly as a result of strictly enforced operational restrictions, passenger numbers have hovered around the three million mark since 2003. The airport is limited to a maximum of 41 daily ‘Air Carrier’ flights (defined as aircraft with a Maximum Take-Off Weight of greater than 75,000 lbs) and 25 daily ‘Commuter Carrier’ flights. With this week’s launch of Allegiant Air services to Bellingham and Stockton, the ‘Air Carrier’ limit has now been reached, but there are still 16 daily ‘Commuter Carrier’ slots available for any interested operators. 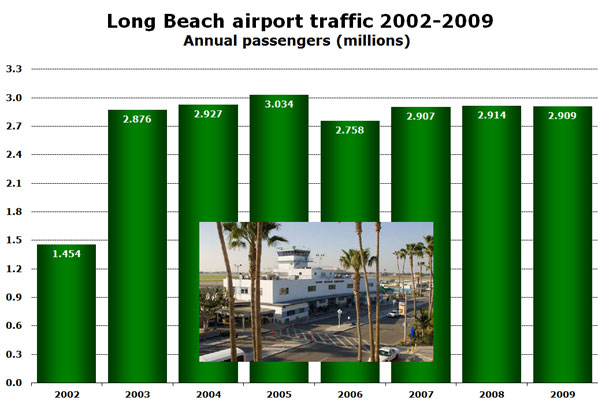 In the first five months of 2010, total passenger numbers have fallen slightly by 2.4%, but JetBlue’s traffic has grown modestly by 2.0%.

All routes served between once and five times per day

Of JetBlue’s 13 current destinations, 10 are served at least twice-daily on weekdays, with San Francisco getting five daily flights and Oakland four. Flights are scheduled to be operated by the airline’s fleet of 150-seat A320s, though Embraer E190s are frequently spotted at the airport when demand is weaker.

In the last two years, JetBlue has added Portland and San Francisco (both in October 2008), but has dropped services to San Jose in California, which it started serving with three daily flights in May 2008. Between 1980 and 1988, Long Beach was home to both Howard Hughes’ legendary ‘Spruce Goose’ flying boat and the Queen Mary transatlantic passenger liner, something the editor of anna.aero was lucky enough to witness for himself way back in 1982. The Queen Mary is still an attraction, while the dome created for displaying the ‘Spruce Goose’ is now part of the Long Beach Cruise Terminal.

Between 1977 and 1983, the Long Beach area also hosted the Formula 1 US Grand Prix West, using a layout that was often compared with the famous Monaco track in Europe. In 1983, the race was famously won by John Watson who started 22nd on the grid. Since then, it has been a popular venue for the US Champ Car and IndyCar series.