Unlike its more illustrious footballing neighbours Argentina and Brazil, Uruguay managed to qualify for the semi-finals of the FIFA World Cup in South Africa by beating Ghana in the quarter-finals. With an estimated population of just three and a half million people (compared with 40 million in Argentina and 193 million in Brazil) its civil aviation activities are also correspondingly less high profile. However, last year the country’s Carrasco International Airport, which serves the capital of Montevideo, inaugurated an impressive new terminal designed by the internationally famous award-winning Uruguayan architect Rafael Viñoly. With an initial capacity of 3.5 million passengers, this should cater for the country’s air travel growth for several years to come. 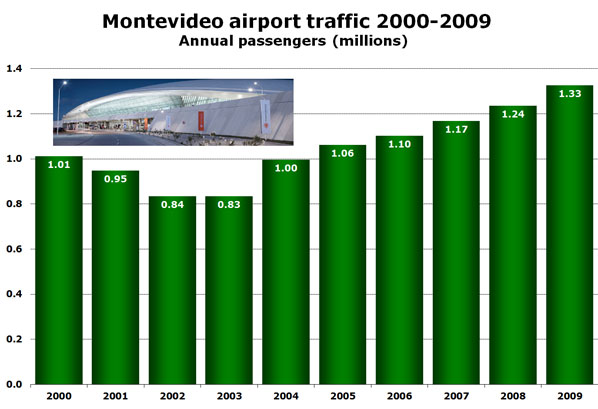 Pluna has seven CRJ900 NextGen regional jets that began arriving in 2008. In April, it signed an order for three more, while taking options on an additional six. The Canadian link goes much further than Bombardier – Jazz Air (another big CRJ operator) also bought a major shareholding in Pluna around the same time.

Growth in recent years has been steady rather than spectacular with Pluna the leading local carrier operating a fleet of seven CRJ 900s. The airline, in which the Canadian airline Jazz Air has recently taken a stake, has orders for three more CRJ 900s to be delivered in 2010. Pluna is the leading carrier in Montevideo operating just over half of all scheduled flights to nine international destinations. 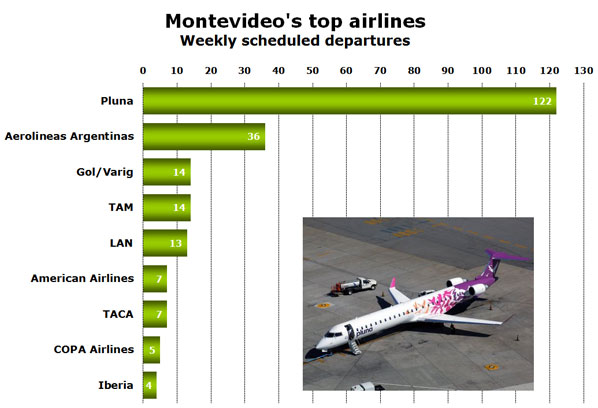 During the last 12 months, Pluna has added daily flights to Porto Alegre in Brazil (June 2009) and thrice-weekly flights to Buenos Aires’s international airport at Ezeiza in March of this year. Montevideo’s busiest route by far is to Buenos Aires’ ‘downtown’ airport Aeroparque Jorge Newbery (which is a distance of around 215 kilometres) which accounts for around 40% of all flights. Pluna serves this airport with 58 weekly departures while Aerolineas Argentinas operates a further 36 weekly flights.

A new airline called BQB Lineas Aereas started operating domestic flights earlier this year from Montevideo to Rivera (RVY) and Salto (STY) using two ATR 72-500s. The airline is a subsidiary of Buquebus, a major local coach and ferry company. The airline also operates from Punta del Este to Porto Alegre but does not appear to be reporting its schedules to OAG at present. Punta del Este is Uruguay’s second busiest airport and handled around 165,000 passengers in 2009, down 19% from 2008.

Long-haul flights to Madrid and Miami 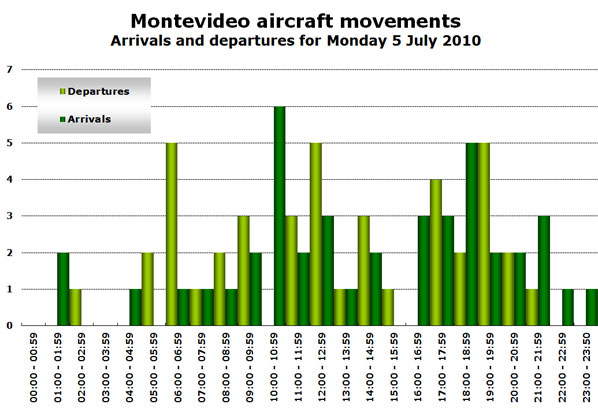 Analysis of a day’s operations at the airport reveals that commercial flights operate around the clock. The pre-06:00 arrivals are from Sao Paulo (GOL and Pluna) and Lima (TACA), while the pre-06:00 departures are to Buenos Aires (Pluna), Panama City (COPA) and Sao Paulo (GOL). The busiest hour is from 12:00 to 12:59 with eight aircraft movements.