Continental continues expansion into new continents; will serve Cairo from May 2011 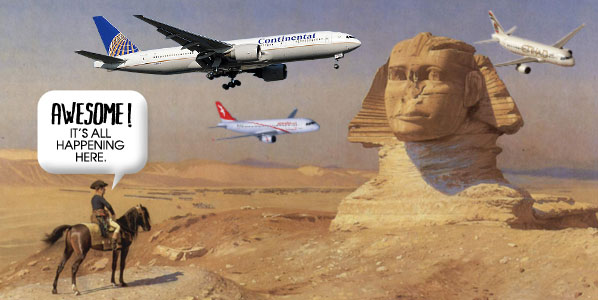 Continental’s Cairo service will beat the recently announced Lagos route to becoming the airline’s first ever African route. From May 2011, daily flights will begin from Newark.

Following Continental’s announcements to launch flights to New Zealand and Nigeria in November next year, Egypt has now been announced as the first African market for the airline that is set to merge with United by the end of the year. From May 2011, the airline is planning to operate non-stop daily flights between its Newark hub and Cairo, where it connects with alliance partner Egyptair.

The 9,000-kilometre route is scheduled to operate with 276-seat 777-200ER aircraft. New York is the only US city with Cairo services, with JFK served by both Delta and Egyptair.

Etihad next in line to serve Alexandria; Air Arabia Egypt to compete

Following a number of recent launches to and from both of Alexandria’s airports, El Nouzha and Borg El Arab, two airlines have now announced services between the northern Egyptian city and Abu Dhabi, due to be launched at short notice.

Etihad will serve Alexandria’s El Nouzha Airport. The route was first announced without a specific July date on 1 July, but has now been confirmed to be launching as soon as 12 July. With only marginally longer notice, new startup Air Arabia Egypt announced the same route from the same date, although operating from Borg El Arab Airport. Both services will be operated four times a week. 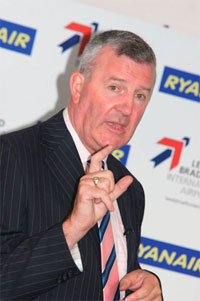 Ryanair’s COO and deputy CEO Michael Cawley was on site at Leeds/Bradford to announce the continuation of the base for the winter season – with four new routes to be served.

Ryanair adds four new routes at Leeds/Bradford this winter; one of two UK bases not to be downsized

Only a few days after Ryanair announced that it will reduce UK capacity this winter, citing the Air Passenger Duty (APD) as the reason, a contrasting message comes from Leeds/Bradford. Along with Edinburgh, the Yorkshire airport is the only Ryanair base not to see reductions this winter. The new Ryanair base, which only launched at the beginning of this summer season, remains intact during the winter season with two based aircraft.

13 routes will be operated, of which four are new. Gdansk becomes the airport’s second Polish destination, complementing the year-round Krakow services. The Canary Island of Fuerteventura, which is served by Jet2.com during summer, is also added by Ryanair for the winter season. Its summer Girona services are this winter replaced with flights to the main Barcelona airport and Düsseldorf Weeze is the fourth addition.

An enthusiastic Tony Hallwood, commercial director at Leeds Bradford International Airport, told anna.aero about the suitable mix of routes, which allows for both outbound and inbound traffic flows. He says that the seven new destinations Ryanair already has brought to the airport have managed to stimulate the market, which is promising for the winter season.

easyJet grows in Ljubljana and Gothenburg 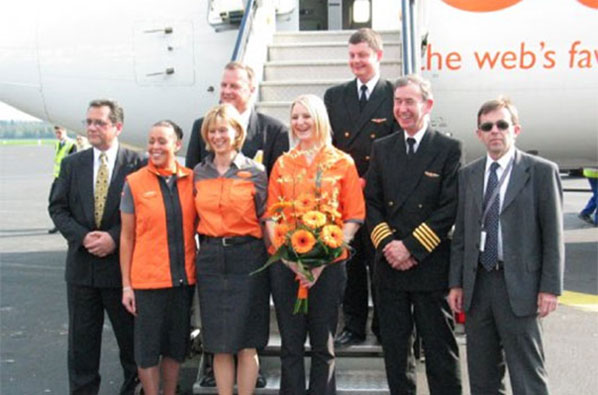 The result of digging around our archives: a picture from easyJet’s arrival to Ljubljana six years ago. The London route will be joined by flights from both Paris and Milan at the end of this year.

easyJet has announced a number of new routes for the winter schedule. Among them, two airports that currently have no or only limited services with the airline will each receive multiple new routes.

The Slovenian capital Ljubljana, which easyJet has served from London Stansted since its EU accession in 2004, will see the airline expand with two new routes in December. Both Paris CDG and Milan Malpensa will be served three times a week. While the Milan route is uncontested, easyJet faces both Air France (13 flights a week) and Adria Airways (10 weekly operations) on the Paris route. Between 2004 and 2006, easyJet also served Ljubljana from Berlin Schönefeld.

After easyJet’s recent announcement of its first route to Gothenburg, a daily London Gatwick service due to be launched in September, the airline now makes official two further routes, from Berlin Schönefeld and Manchester. This means that Göteborg Landvetter Airport will offer the most easyJet routes in Sweden, as the airline currently only serves Stockholm Arlanda with two routes from Milan Malpensa and Geneva.

The three weekly flights between Manchester and Sweden’s second biggest city compete with City Airline’s 11 flights a week, while the Berlin service will be in indirect competition with airberlin’s 13 weekly flights to Berlin Tegel. 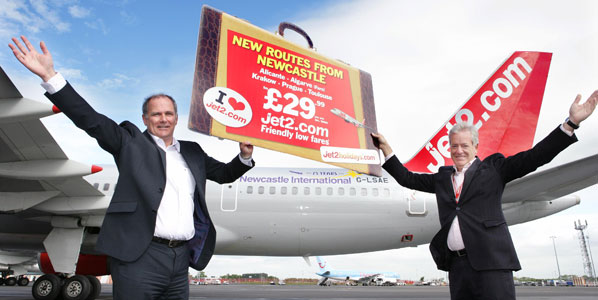 Chris Sanders, Head of Airline Relations at Newcastle International, and Ian Doubtfire, Managing Director Jet2.com, celebrate today’s announcement that Jet2.com is adding an aircraft to its Newcastle base, bringing the total to five, and launching five new routes: Prague will begin in November, while new services to Krakow, Alicante, Faro and Toulouse all begin at the start of the next summer season.