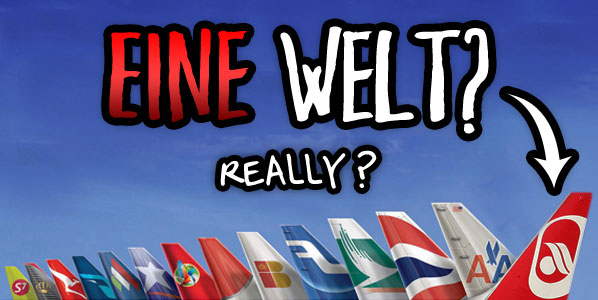 Less than three weeks after anna.aero named airberlin Europe’s third largest airline outside of an alliance after only Ryanair and easyJet, the German airline announced its intention to join the oneworld alliance.

The announcement may have come as a surprise to many. Indeed, the airline used to be known as a low-cost carrier and, although it has gradually moved away from that business model and cannot be said to have much left to categorise it as one, it still has a largely leisure-oriented route network.

There are, however, exceptions. The airline serves a selection of major European cities and the German domestic market is now airberlin’s second largest market. The airline’s Austrian partner Niki, which is to become an affiliate member of the alliance, also launched new routes to three capital cities in southeastern Europe last February, indicating a new network strategy for the carrier.

As oneworld’s Spanish member Iberia already contributes to the alliance with an extensive Spanish network, the benefits of airberlin’s Palma de Mallorca hub is reduced at the same time as there is a risk of route overlap. The Spanish domestic market is the third largest for airberlin, ranking behind international traffic between Germany and Spain, followed by the already mentioned German domestic market.

The direct route overlap is, however, limited. Iberia operates four routes year-round to Palma. These domestic, high-frequency services from Madrid, Ibiza, Menorca and Valencia all face competition from airberlin, while the German carrier provides a further nine domestic destinations non-stop from Palma. All of these airports are also served by Iberia, creating connection opportunities.

Limited contribution outside of Germany and Austria 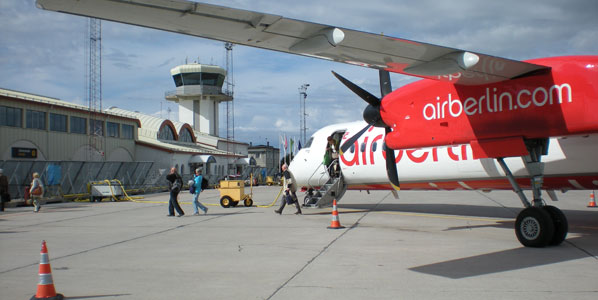 While airberlin claims that it will contribute “almost 75 gateways to the oneworld map”, the question remains as to just how beneficial some of these will be. One such example is the recently launched seasonal, weekly service between Berlin Tegel and Visby on the Swedish island of Gotland.

airberlin proclaims that it contributes with “almost 75 gateways to the oneworld map”, but anna.aero’s comparison of OAG 2010 schedule data for airberlin and Niki with that of oneworld (current members as well as future members S7 and Kingfisher) reveals only 51 destinations served by the two German and Austrian carriers that are not already served by other oneworld members. More importantly, it can be debated how important many of these ‘gateways’ are to the future partner airlines. airberlin and Niki contribute with 18 regional airports in Germany and Austria, while the majority of the remaining ‘new’ airports could be defined as ‘sun and beach’ destinations. Significant exceptions are Florence, Gdansk and Reykjavik.

Notably, airberlin does not even serve its alliance sponsor British Airways’ hubs at either London Heathrow or London Gatwick. Instead, the airline flies into London Stansted, which counts as one of the 51 new destinations airberlin would add to oneworld. It could, however, be presumed that the airline is planning to switch London airports to gain connectivity in that market.

airberlin serves six oneworld hubs, as detailed in the table below. It should be noted that Mexicana’s Cancun base, while counting as one of the airline’s hubs, is much smaller than its primary hub in Mexico City.

Conversely, six of oneworld’s 13 current and future members serve at least one of airberlin’s hubs at Berlin Tegel, Düsseldorf, Palma de Mallorca and Vienna. With the exception of Royal Jordanian’s five weekly flights to Vienna, these are all European members of the alliance. 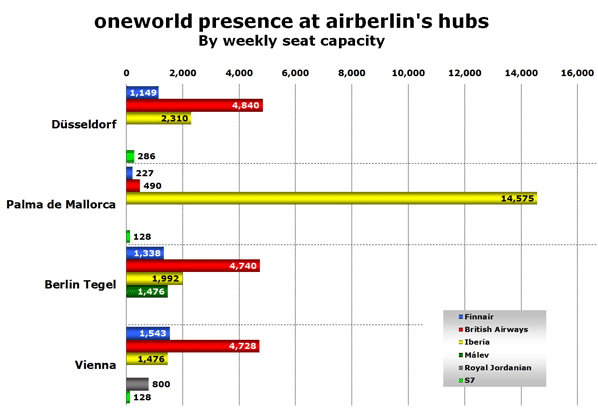 The airline’s home markets’ geographical location does make sense for oneworld, which has the weakest European presence of the three global airline alliances. airberlin fills the gap in the centre of Europe, between Malév’s Hungary, Finnair’s Finland, BA’s UK and Iberia’s Spain. It remains to be seen if airberlin’s way to becoming a member of the alliance in early 2012 will be characterised by a further shift in network strategy and if more oneworld members will launch services to its hubs.