Brazilian domestic demand up 27.6% in first half of 2010; TAM and GOL losing market share to Azul, Trip and WebJet

Demand for domestic air travel in Brazil continues to grow at an impressive rate. In the first six months of 2010, demand (as measured by RPKs) was up 27.6% compared with the first six months of 2009, while capacity (as measured by ASKs) had increased by a more modest 19.5%. As a result, the average load factor (the ratio of RPKs to ASKs) has increased from 63.2% last year to 67.4% this year. 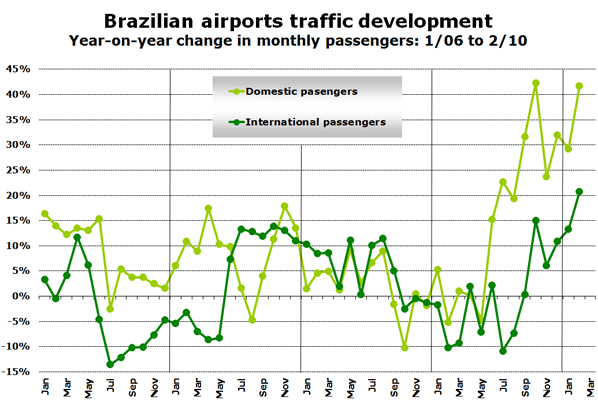 According to airport data provided by Infraero, international traffic continues to grow as well, though not as rapidly. In 2009 Brazil’s airports handled 128.1 million passengers of which 115 million were on domestic flights and just 13.1 million were travelling internationally. In 2008 the corresponding figures were 113.3 million, 100 million and 13.3 million respectively.

Although TAM (+12.4%) and GOL/VRG (+27.7%) have both seen significant domestic demand (RPK) growth in the first six months of 2010, their combined share of the domestic market continues to fall slowly, from 85% in December 2009 to 82% in June 2010. Three of the other four significant carriers in the domestic market have reported much more dramatic growth in 2010. Azul has seen demand grow by 147% in the first half of this year, Trip’s demand is up by 113% while WebJet is up 99%. 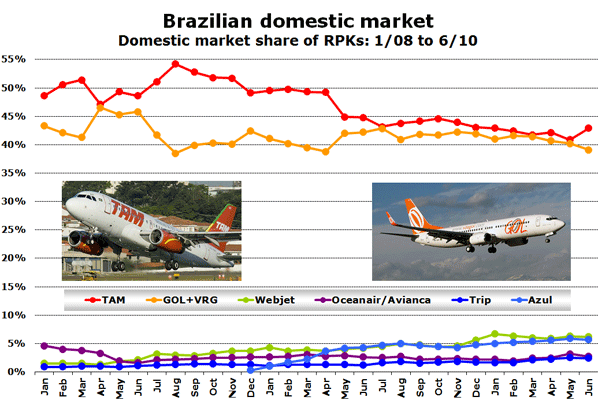 The latest published data from Infraero (who count passengers) is only for February 2010. ANAC, which analyses airline performance, has data as recent as June. However, ANAC measures demand in terms of RPKs (revenue passenger kilometres). The difference in passenger growth and RPK growth can be explained by changes in average sector length.

With RPKs growing faster than passenger numbers this suggests that the average trip length in the Brazilian domestic market is gradually increasing.