Seville is latest Ryanair base in Spain; network will expand from current 18 destinations to 29 this winter 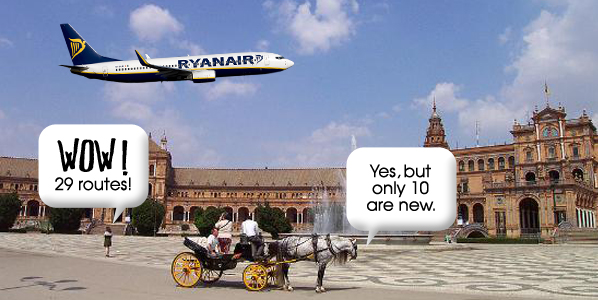 anna.aero takes a personal interest in Ryanair’s most recently announced base – Seville in southern Spain – since we long have wanted to travel to the Andalusian capital from our local airport London Gatwick, which now is one of ten new routes to be launched from the new base at the beginning of November.

Notably, this expansion is not the result of new aircraft deliveries, but the two Seville-based aircraft are moved from existing Ryanair bases that this winter season are being downsized, which is taking place in the UK & Ireland.

Based on historical experience, Seville seems like a safe bet. Ryanair has served the airport since February 2005 and has expanded without dropping a single route since. The airline currently serves the airport with 18 destinations from 16 of its bases as well as two non-base routes to Morocco. At the launch of Ryanair’s Barcelona base in September, when another Seville service begins, the airline will operate 19 routes to the airport.

The only route on which Ryanair currently faces direct competition is to Alicante, which Iberia serves with 10 weekly 50-seater services. There is also indirect competition to London Heathrow, Barcelona, Rome Fiumicino and Brussels, all from Vueling, which is the other airline to operate a base in Seville. Barcelona is also served by Spanair and Brussels by Brussels Airlines. Transavia.com’s French arm, which serves Seville from Paris Orly, is the only other low-cost carrier to serve Seville, which has evaded the likes of easyJet.

Ryanair will rival Vueling for #1 position 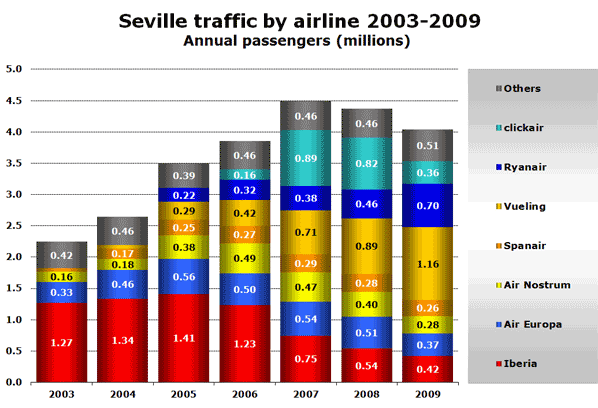 Although Seville, which is not located on the seaside, has not had the same low-cost invasion as many other southern Spanish airports, the airport traffic doubled between 2003 and the peak year of 2007. Iberia has consistently shrunk its presence in Seville during the latter half of the last decade, making way for low-cost traffic. By 2009, Vueling/clickair and Ryanair alone made out 55% of the airport’s passenger numbers.

Ryanair estimates 1.5 million annual passengers in Seville when its base has been launched, which compares with Vueling’s and clickair’s combined 1.52 million passengers in 2009. It remains to be seen which of the two will manage to hold the title of Seville’s largest airline.