March 2010 – not a route launch as such: The traditional salute (seen here from both inside and outside the aircraft) signifies that Air One has taken over Alitalia’s busy trunk service from Malpensa to Palermo, the Sicilian capital. Since the start of summer 2010 Air One has become Alitalia’s own low cost, or “Smart Carrier”, in direct competition with easyJet and Lufthansa Italia. 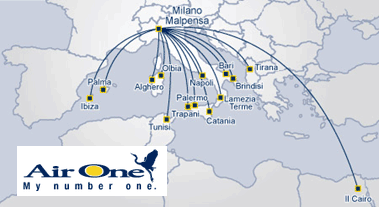 When the ‘old’ Alitalia merged with local rival Air One in early 2009 it was generally assumed that the Air One brand would rapidly disappear. However, having virtually completely pulled out of its once significant Milan Malpensa hub (leaving the way open for rapid expansion by easyJet and the emergence of Lufthansa Italia), Alitalia’s management has decided since the start of the summer 2010 season to use Air One as a “Smart Carrier” to operate five A320s (in a ‘low-cost’ configuration of 180 seats) out of Malpensa, mostly on domestic routes in direct competition with easyJet, and to a lesser extent Lufthansa Italia.

This summer the airline’s network (bookable at the airline’s own separate website) consists of 14 routes, of which nine are domestic and five are international. All of these routes are operated either once or twice per day.

easyJet is a direct competitor on nine routes (seven domestic and both routes to Spain) while Lufthansa Italia operates competing flights on four of the routes (all of which are among easyJet’s nine competing routes).

There appears to be some confusion regarding the Cairo route. Although listed in Air One’s booking tool and route map, according to OAG (and Alitalia’s own booking tool) the route is still operated by Alitalia (with an A321) rather than Air One, at least at present.

There are suggestions that the Air One fleet will grow to 10 aircraft by 2010. Here at anna.aero we will be keeping a close eye on developments to see if Alitalia is genuinely committed to operating an ‘in-house’ LCC and how its network strategy will evolve.