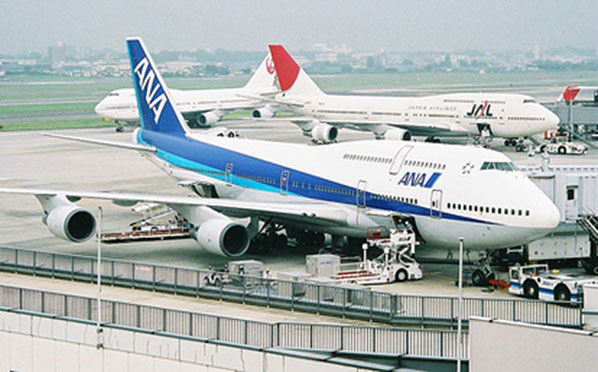 In May, ANA reported that total passenger traffic was up by 7.8% year-on-year, while the financially stricken JAL also reported a 1.1% increase despite its ongoing downsizing project.

Latest traffic data from Japan’s two dominant carriers (ANA and JAL) and the Japanese Ministry for Land, Infrastructure, Tourism and Transport shows that domestic and international passenger numbers for the first five months of this year are virtually unchanged from a year ago. As a result, domestic traffic is still down around 10% versus two years ago while international traffic is down around 14%. Passenger numbers at Japan’s top 6 airports (Tokyo Haneda, Tokyo Narita, Sapporo Chitose, Fukuoka, Osaka Itami and Osaka Kansai) have fallen by almost 10% in the last two years from 171.1 million in 2007 to 154.5 million in 2009. Tokyo’s two airports saw passenger throughput decline from 102.3 million in 2007 to just 94 million in 2009. The biggest decline, however, has been at Osaka’s island airport of Kansai where traffic has fallen by almost 20% in just two years to 13.4 million. 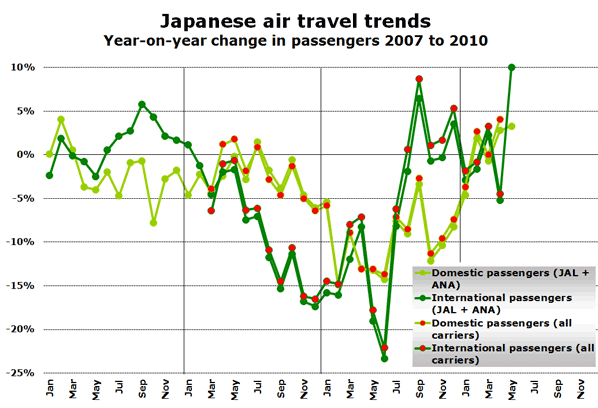 While JAL’s international passenger numbers were down 8% (to 4.13 million) in the first five months of 2010, ANA has seen demand for its international services grow by 22% (to 2.07 million passengers).

Tokyo airport networks continue to evolve; US carriers will return to Haneda 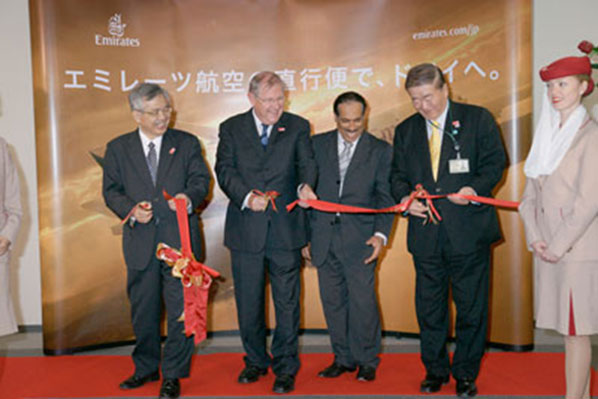 At the beginning of the summer season several foreign carriers launched new international routes to Tokyo Narita. All three of the ‘MEB3’ carriers (Emirates, Etihad and Qatar Airways) launched flights to their home bases, while Air Canada (to Calgary), Air Macau (to Macau) and Shenzhen Airlines (to Fuzhou) also initiated new links. On 1 July ANA began daily flights to Munich using a 777-300ER.

From the start of the winter season several carriers will begin new international services to Tokyo’s more convenient Haneda airport. Cathay Pacific will begin twice-daily flights to Hong Kong, Singapore Airlines will start double-daily flights to Singapore and Thai Airways will serve Bangkok daily. Last winter the only international markets that were served non-stop from Haneda were China (Beijing and Shanghai), Hong Kong, and Korea (Seoul).

From late January 2011 US carriers will also be back at Haneda. After a variety of bids from US carriers, US authorities have granted American Airlines permission to start New York JFK flights, and for Delta to operate from both Detroit and Los Angeles.