UK-Paris ain’t quite what it used to be as the regions have taken on a 60% dominance of the market (yes we know Flybe doesn’t fly to all these places, but it might with its nice new Embraer 175s).

Before the Channel Tunnel finally opened in late 1994, France was the second largest UK air travel market in Europe, some distance behind Spain. In that year over five million passengers flew between the UK and Paris alone, with a further two million travelling between the UK and various French regional airports resulting in a total market of just over seven million annual passengers. Air traffic to Paris fell by almost 20% within two years as the Channel Tunnel attracted a significant share of former air travellers. However, air travel to airports outside of Paris continued to grow every year until 2009. Between 1987 and 2008 this market grew almost six-fold from 1.2 million annual passengers to seven million. 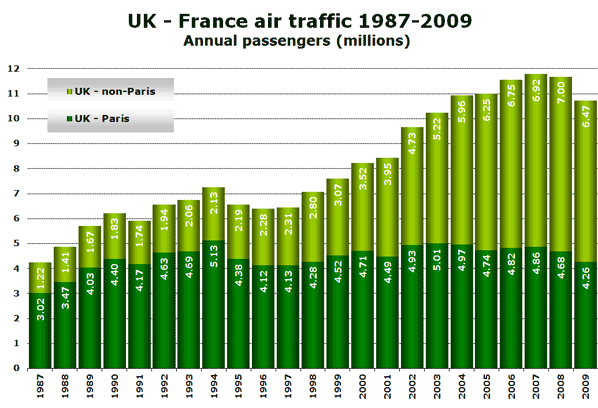 Five carriers now account for 93% of all flights and seats between the UK and France though no single carrier is dominant. National carriers Air France and British Airways compete with Europe’s two leading LCCs (easyJet and Ryanair) as well as Flybe. 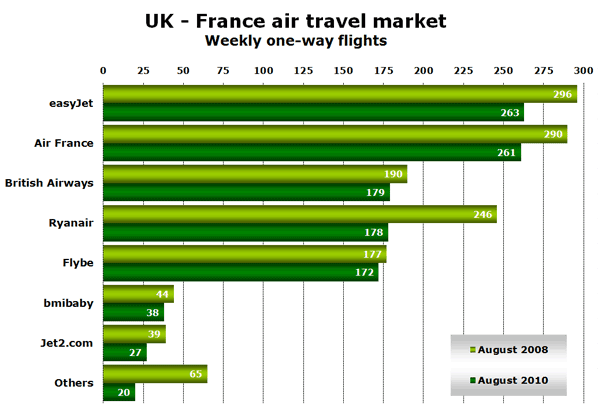 Total capacity and frequencies have been cut significantly (by about 16%) in the last two years but the various key players have not all been equally severe in their cutbacks. Flybe has made only small frequency cuts (and actually increased capacity) while British Airways has also reduced flights by just 6%. Both Air France and easyJet have reduced capacity by around 10% but the biggest change has been at Ryanair. The carrier has cut its weekly flights by almost 28% from 246 in August 2008 to just 178 this summer:

Despite the large reduction in flights, the number of routes served has fallen by a less dramatic 13% from 46 to 40. In reality the carrier has actually started 11 new routes between UK and French airports (four from Leeds/Bradford and three from Edinburgh), but has dropped 17 resulting in a net loss of six routes. 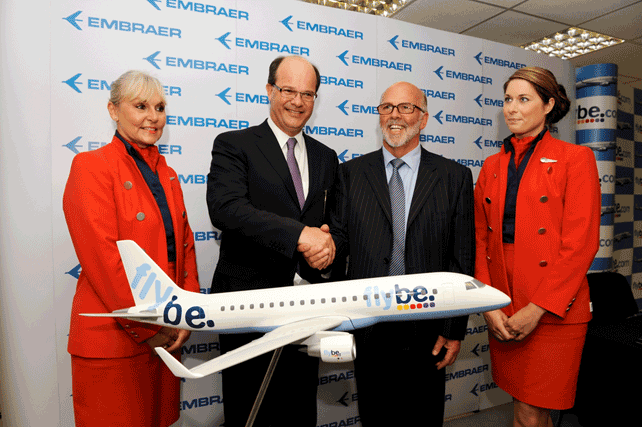 Ideal for new “French” services: Last month at the Farnborough Air Show Jim French, Flybe Chairman and Chief Executive (third from left), explained plans to purchase up to 140 Embraer 175s to “support its planned European growth” and confirmed the first $1.3 billion order for 35 units for delivery September 2011-March 2017. French says the new 88-seat plane is “particularly suited to the sector lengths prevalent in Europe that we are most interested in exploiting.”

Earlier this month Air France and Flybe announced an extensive codeshare arrangement focussed on connections between France and the UK but also involving onward domestic connections in the UK and France, as well as onward connections from Paris CDG to a range of major European cities. The agreement is expected to come into operation at the start of the winter season and could herald closer links between the two carriers. Although Flybe is currently an independent carrier, there has been speculation for some time that its ultimate destiny may involve it being acquired by one of Europe’s larger airlines. This latest announcement suggests that Air France and the SkyTeam alliance may play a significant role in the airline’s longer-term future.