Namibia may see traffic boost from remake of cult TV series ‘The Prisoner’; non-stop flights to Germany but no longer UK This first picture, from a Danish travel blog, is captioned: “Our Air Namibia plane at Hosea Kutako International Airport, right in the middle of nowhere.” It certainly is quiet in Namibia which has just about the lowest population density on the planet. German links are strong – 126,000 use the Frankfurt-Windhoek service and a further 33,000 travel on the Munich route.

Namibia, in south-west Africa, is the world’s 34th largest country (two-thirds the size of neighbouring South Africa) and yet has a population of just 2.1 million people. As a result, its population density is lower than even Australia and Iceland and just about the lowest on the planet. The capital, Windhoek, is served by two airports. The delightfully-named Eros is just seven kilometres from downtown and is used only for domestic flights while Hosea Kutako airport is over 40 kilometres from the city centre and is used almost exclusively for international services. Last year the airport handled around 680,000 passengers, just over 4% down on the previous year when over 710,000 passengers were processed (Source: ICAO). This ranks it somewhere between 30th and 40th among African airports. 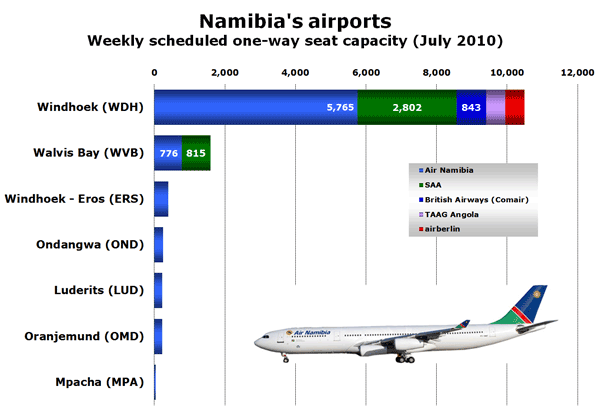 Air Namibia is the country’s dominant carrier and only provider of scheduled services at several airports. South African Airways serves both Cape Town and Johannesburg from Windhoek (in competition with Air Namibia), while TAAG Angola Airlines operates non-stop to both Luanda and Lubango. British Airways has a presence thanks to South African franchise partner Comair which also operates daily flights to Johannesburg.

airberlin is the only other scheduled carrier present with a twice-weekly service to Munich. The viability of the German market can be traced to the fact that the country was under German rule from 1884 to 1915, although it is a brave network planner who puts that kind of unqualified argument straight into a business plan. Patrick McGeehan in the 1960s cult British TV series “The Prisoner” which was filmed in the Welsh village of Portmeirion, and Sir Patrick McKellen among Swakopmund’s fascinating architecture for last year’s unnecessary re-make. 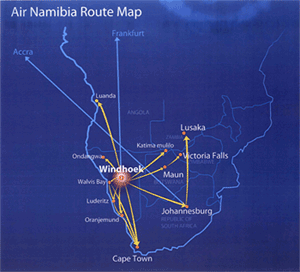 The country’s state-owned national airline, Air Namibia, currently operates a relatively small fleet of just eight aircraft, these comprising two A340-300s, two 737-500s and four 19-seat Beechcraft 1900D. The latter are used for domestic and near regional services while the 278-seat A340s are reserved for the airline’s intercontinental route to Frankfurt, further highlighting the importance of the German market.

According to various sources, since the end of April this year, an A319 has been wet leased from Balkan Holidays Air. In the recent past the airline has also operated 747s, MD-11s and Dash 8s. It is believed to be looking at replacing some of its existing fleet with newer aircraft.

Remake of ‘The Prisoner’ filmed in Swakopmund

A recent remake of the cult 1960s TV series ‘The Prisoner’ was filmed predominantly in Namibia (the original was shot in Portmeirion in Wales). Thanks to the region’s historic links with Germany, there are a number of incongruous appearing German-style buildings in the coastal town of Swakopmund which is also close to a desert region. Whether this will have any impact on inbound tourism (or the resumption of non-stop services from the UK to Namibia) remains to be seen.