Antalya Gazipasa welcomed its first scheduled flight in July, with a Borajet service from Istanbul Sabiha Gökcen operated five times per week with an ATR72. Istanbul’s second airport has seen 93% growth to 4.86 million passengers in the first half of 2010.

Last year Turkey’s airports handled a record 85.2 million passengers, up 7.3% from the 79.4 million in 2008. With Turkish Airlines, its low-cost subsidiary AnadoluJet, Pegasus and SunExpress all growing, traffic has surged in the first half of 2010. Between January and June some 44.3 million passengers passed through the country’s airports, up a phenomenal 23.7% on 2009. While Istanbul Ataturk airport remains the country’s busiest (and reported growth of 10%), the city’s second airport (Istanbul Sabiha Gökçen) has grown most dramatically. Passenger numbers there are up 93% to 4.86 million catapulting the airport to third in the national rankings. 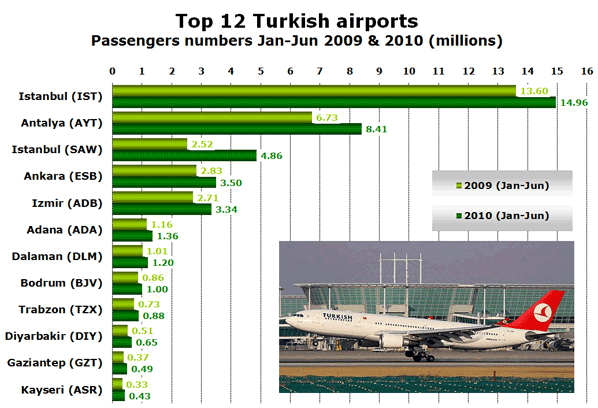 Since the start of the year Turkish Airlines has launched new routes from its main base at Istanbul Ataturk to Bologna (1 March), Adler/Sochi (25 May), Dar Es Salaam (14 June), Alexandria (19 June), Podgorica (8 July) and Accra via Lagos (15 July). Before the end of the year it also plans to start services to Washington Dulles, followed by Los Angeles next March.