United at Denver: Despite offering around 10% less seat capacity compared to August 2008, the number of United destinations served has risen slightly from 118 to 120. All six new routes added in this time have come from its SkyWest partner.

United Airlines’ second biggest base (after Chicago O’Hare) is at Denver International Airport in Colorado. For the last decade and a half the carrier (and its affiliates and partners) have consistently carried between 20 and 25 million passengers annually through the airport. In recent years, a growing proportion of the capacity has been subcontracted out to carriers such as GoJet, Mesa, Shuttle America, Trans State Airlines and, most significantly, SkyWest. 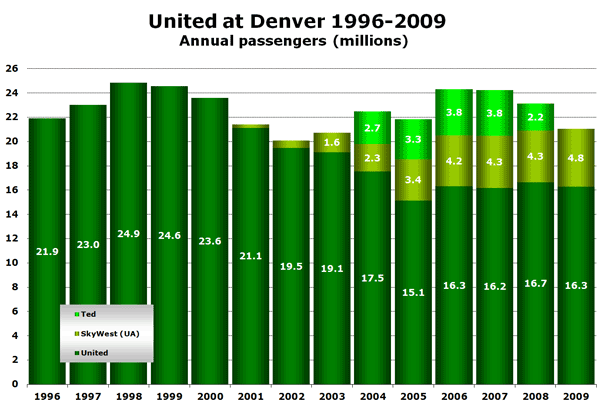 Between 2004 and 2008, United’s ‘low-cost’ subsidiary Ted operated a number of routes from the airport. This was United’s attempt to compete more effectively with growing low-cost competition provided at the airport by Frontier Airlines and Southwest.

Along with almost all other US carriers, United has cut capacity during the last two years across its network. According to OAG data compared with August 2008, United now offers around 10% less seat capacity at Denver. However, the number of destinations served has risen slightly from 118 to 120. Six new destinations have been added which are summarised below.

All of these new routes are operated by SkyWest using regional jets. During the last two years, routes to Charlotte, Fort Lauderdale, Miami and Raleigh-Durham have been dropped. Charlotte is still served from the airport by US Airways, Fort Lauderdale by Frontier and Southwest, Miami by American and Raleigh-Durham by Southwest. Another new service to Ottawa was started in June 2009 but was axed almost exactly one year later.

Growing competition from Frontier and Southwest

Analysis of the top 10 destinations served by United from Denver in terms of weekly seat capacity shows how much competition the airline is facing in the point-to-point market.

Southwest competes head-to-head on eight of United’s top 10 routes, while Frontier is a competitor on seven. In addition, Alaska Airlines, American Airlines and JetBlue also provide passengers with further options on specific routes.

Of United’s 120 routes, a full 109 are to domestic destinations with a further seven to Canada and three to Mexico (Cancun, Puerto Vallarta and San Jose Cabo). The airline’s only inter-continental service is to London Heathrow, which operates daily in the summer competing with British Airways’ daily service which operates year-round.