The warm welcome in Minsk for the new Teheran service. Eight new routes have been started in the past 15 months. The next launch is a new Batumi (Georgia) service beginning mid-September.

Belavia Belarusian Airlines, the national carrier of Belarus has seen passenger numbers double in the last six years and last year handled just under 700,000 customers. From its base in Minsk (the country’s capital) the airline now serves 32 destinations non-stop with a fleet of mostly Western built aircraft, and accounts for almost 70% of traffic at the airport. This week saw the launch of new non-stop services to Stockholm and Tehran, while the airline also unveiled plans to start services to Batumi (in Georgia) from the middle of September. 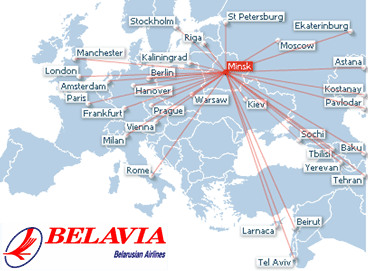 Since last June the airline has started seven new routes with the new Batumi service planned to start next month. Since mid-2008 the only routes that have been dropped were a weekly service to Frankfurt Hahn and a twice-weekly service to Shannon.

Routes to Adler/Sochi, Hannover, Kostanay (Kazakhstan), Manchester and Pavlodar (Kazakhstan) are all summer-only services and terminate at the end of August or beginning of September.

Russian routes account for 35% of capacity; Germany #1 in Western Europe

Belarus declared independence in 1991 but not surprisingly Russia is still its leading country market for air travel. Belavia serves seven airports in Russia including all three Moscow airports, St Petersburg and Ekaterinburg. Apart from Russian destinations the only other airports served with daily flights are Tbilisi in Georgia and Kiev in the Ukraine. The leading Western European market is Germany. Berlin, Frankfurt and Hannover are all served either three of four times weekly.