Mexicana’s uncertain future: Big network shake-up posed by possible removal of biggest player; 30% of domestic market and 20% of US-Mexico market up for grabs 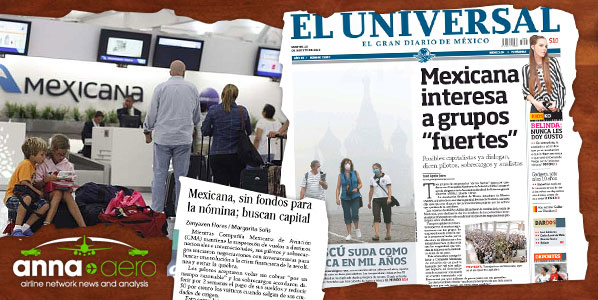 If Mexicana fails it will leave a sizeable hole in the domestic/international networks but plenty of competitors ready to step in – these airlines would also no doubt welcome the capacity reductions in a domestic market still 13% down (Q2 2010 versus 2008).

The Mexicana group of airlines (which includes Mexicana Click and Mexicana Link) carried just over 11 million passengers in 2009 (6.6 million on domestic routes and 4.5 million on international routes primarily to the US), using a fleet of some 110 aircraft. The airline’s current difficulties suggest it may struggle to survive in its current form. This week anna.aero takes a closer look at the airline’s network.

During the past three years the Mexicana group has managed to grow its share of what was a burgeoning domestic market, from around 22% at the beginning of 2007 to somewhere between 28% and 30% for most of the last 12 months. This has been achieved by the mainline Mexicana airline downsizing but ramping up activities at Mexicana Click (which was originally envisaged as a low-cost carrier), and Mexicana Link (its CRJ-operating subsidiary based at Guadalajara). 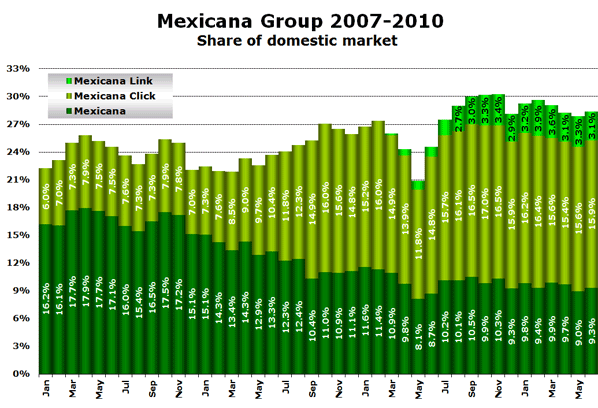 Mexico City base involved in three-quarters of all flights

Analysis of OAG schedule data for last week reveals that Mexico City is by far the carrier’s busiest airport with almost three-quarters of all flights starting or ending at the country’s biggest airport. Among the airline’s busiest airports just two of the top 12 are not in Mexico; Los Angeles (ranked fifth) and Chicago O’Hare (ranked ninth). From Mexico City the carrier operates to 59 destinations non-stop. 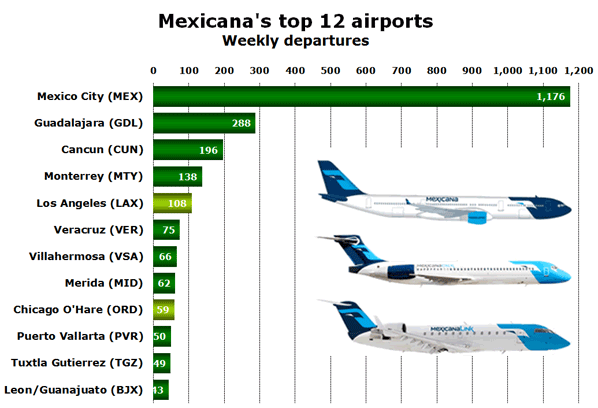 In total the airline has been serving 66 airports in 14 countries. Prior to current developments around 61% of total scheduled capacity was spread across 54 domestic routes, while US routes accounted for a further 27% of seat capacity. Based on recent schedule data Mexicana has around 19% of the US-Mexico market based on seat capacity, with other Mexican carriers Aeromexico and Volaris having just 9% and 3% respectively. US carriers dominate with 70% of capacity led by Continental (20%), American Airlines (15%) and Delta and US Airways (each with a further 10%).

Canada was responsible for a further 2% with the remaining 10% allocated across 11 other country markets. The carrier’s only routes beyond the Americas are/were two routes to Europe; London Gatwick and Madrid were both served four times weekly until they were cancelled at the beginning of this week.

The airline’s top 10 domestic routes (by weekly frequencies) are all from Mexico City. Aeromexico competes head-to-head on nine of these routes, with greater frequency on three of them. In addition Interjet, a local LCC, has secured slots in recent years (after the collapse of Aerocalifornia in the middle of 2008, and the demise of Aviacsa in the middle of 2009) to provide genuine low-cost competition on seven routes. 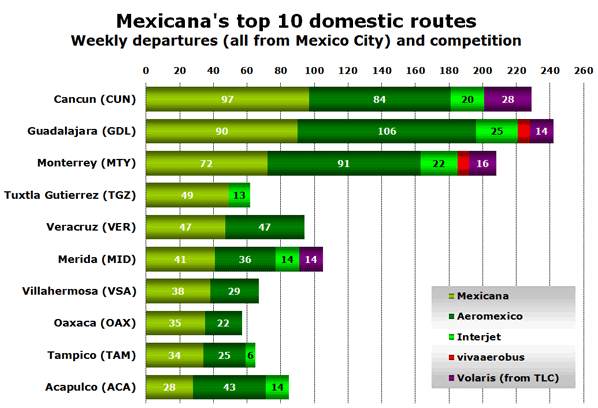 Clearly if Mexicana were to collapse it would leave a sizeable hole in the Mexican market but plenty of competitors would be ready to step in, and with domestic traffic still down 13% (compared with 2008) in the second quarter of 2010 some sort of capacity reduction in the market may be beneficial to the profitability of the remaining carriers.