July 28 – the very Japanese-style send off from Shanghai to Tokyo/ Ibaraki which Spring describes as “the new Tokyo gateway”. 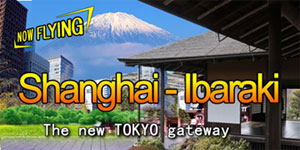 Shanghai-based Spring Airlines is one of just a handful or private airlines in China. A subsidiary of a major travel company, the low-cost airline recently celebrated five years of operations by launching its first charter flights on 28 July to Ibaraki airport in Japan, which it describes as “the new Tokyo gateway”. In 2009 the airline carried 4.3 million passengers at a load factor in excess of 90%. Since then the carrier has seen its fleet of A320s grow from 14 to 20 so around 6 million passengers are likely to be handled in 2010.

Aircraft shared across both Shanghai airports

No route is currently served with more than three daily flights, but only three routes are not operated at least daily. Nearly all of the fleet take to the air between 07:00 and 07:50, and some aircraft do not return to base until 00:50 the following morning. The banner congratulates and thanks the passengers for choosing Spring for the new Tokyo/Ibaraki service. In 2009 Spring carried 4.3 million passengers at a load factor in excess of 90%; with its fleet of A320s growing from 14 to 20 around 6 million passengers could be handled in 2010.