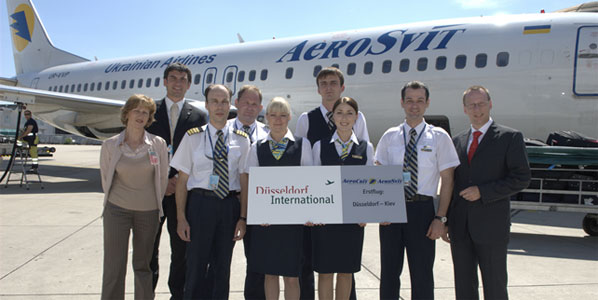 AeroSvit’s Kiev-Dűsseldorf launch. Based on current schedule data Aerosvit is around twice as big as the next biggest Ukrainian carrier in terms of international seat capacity.

When anna.aero last looked at the air travel market in the Ukraine in June 2008 the country was about to welcome its first low-cost airline services (from Wizz Air). The carrier launched flights on 11 July 2008 from Kiev Borispol airport and has since served (at one time or another) 14 destinations, including three domestic ones. This helped airport traffic in the Ukraine to reach a new high of around 10 million passengers in 2008. However, last year saw airport traffic decline by around 15% to just 8.5 million passengers. 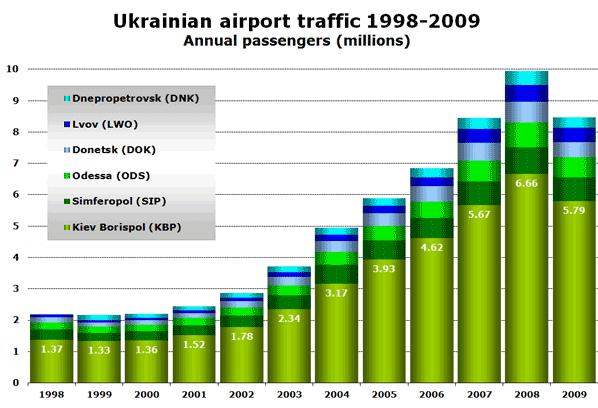 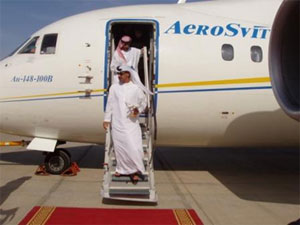 Last year AeroSvit became the launch customer for the new 70-seat Antonov AN-148 regional jet which it operates Kiev-Kharkiv (although in this instance the Ukrainian-built aircraft is clearly on a sales trip to Abu Dhabi).

Kiev Borispol airport has consistently accounted for between 60% and 70% of the country’s air travel demand, and despite a drop of 13% in 2009 it handled 5.8 million passengers last year, more than it handled in 2007. Four other airports (Donetsk, Lviv, Odessa and Simferopol) all registered annual traffic of between 500,000 and one million passengers in 2008.

Kiev’s seasonality profile is typical for many European airports with a peak in August and a low in February. In 2008 the airport handled twice as many passengers in August as it did in February. In the first quarter of 2010 demand is up on the same period in 2009, but still significantly below the peak of 2008. As can be seen from the graph Kiev’s traffic only began to decline as late as November 2008, several months after the majority of countries in Europe. 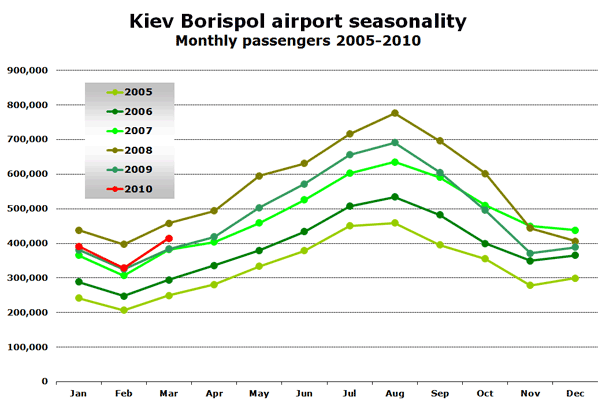 Euro 2012 – there are hopes that this football tournament will be just as good for the Ukrainian co-hosts as the world cup was for South Africa. Dniproavia is the leading domestic airline.

Ukraine’s domestic air traffic is dominated by flights to and from Kiev Borispol airport. Based on OAG data Dniproavia is the leading airline, operating a total of 12 routes, 10 of which involve Kiev. Aerosvit, which is the leading international carrier, codeshares on all of these services. Dniproavia operates most of these domestic routes with a fleet of Embraer ERJ-145s. Ukraine International Airlines operates three domestic routes from Kiev, two of which compete head-to-head with Dniproavia. On the Kiev to Simferopol route there is a third carrier, Wizz Air. This is Wizz Air’s only domestic route after initially operating several others. According to Kiev Airport’s website on Monday 9 August there were a total of 35 domestic departures to 12 different airports.

Since the beginning of 2009 the following carriers have started services to various airports:

Aerosvit and Ukraine International Airlines are both members of the Association of European Airlines (AEA). According to AEA statistics Aerosvit’s passenger numbers fell by 28.2% in 2009 to 1.27 million, but load factors improved 2.1 percentage points to 69.5%. Ukraine International Airlines saw demand fall by 14.6% to 786,000 while load factors fell by seven percentage points to 59.6%.

Now that the World Cup is over European football fans will be turning their attention to the next European Championships in 2012. These will be jointly hosted by Poland and the Ukraine and should lead to an upturn in air travel demand as the country is not one that can be reached easily by road or rail from other parts of Europe.