Scranton has embraced rather than rejected the opportunities of being the fictional location of the hit US TV comedy, The Office. City hall even has a sign sponsored by its most famous non-existent employer, Dunder Mifflin.

The US state of Pennsylvania is home to one of America’s busiest airports (Philadelphia which handled 30.6 million passengers in 2009) and another, Pittsburgh, which saw over eight million people use it last year. Just over 100 miles (160 kilometres) north-west of Philadelphia lie the towns of Scranton (currently best known as the setting for the US TV version of the British sitcom ‘The Office’) and Wilkes-Barre. The two towns share an airport, Wilkes-Barre/Scranton International Airport, located just off the highway that connects them. The cake says it all.

Traffic stable for a decade

Since 2000 the airport has handled between 360,000 and 450,000 passengers annually. A smart new terminal building was opened in 2006 but this has failed to stimulate demand. 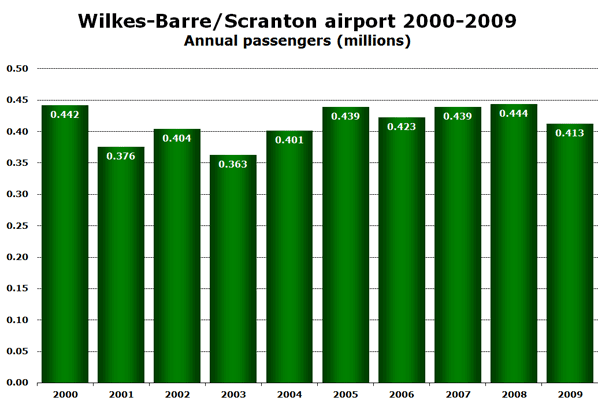 The airport’s entire scheduled network consists of legacy carriers connecting to some of their major hubs. Most recently American Airlines began twice-daily flights to Chicago O’Hare in June, providing competition with United which also serves its O’Hare hub with two daily flights. According to the airport around 85% of its passengers are connecting via these major hubs to other destinations, either in the US or abroad. 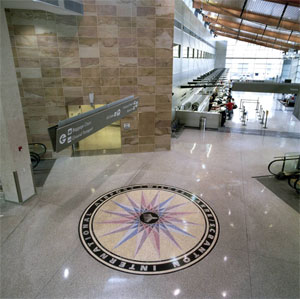 “International” airport – the nice new terminal opened in 2006. “With no direct flights to Florida the airport would appear to be a prime candidate for an airline like Allegiant” observes anna.aero’s editor who visited in July while on vacation.

In the last two years Continental has dropped connections to its Cleveland hub in favour of a higher frequency service (four times daily) to New York Newark, which is only 90 miles (150 kilometres) away. During this period Delta has dropped connections to Atlanta and Cincinnati. As a result Wilkes-Barre/Scranton International Airport now has non-stop flights to just five US airports compared with seven in 2008. All of the routes are currently served by regional jets or turboprops.

During the first five months of this year traffic was below levels reported in 2009, but in June passenger numbers were up 3.4%, in part thanks to the launch of the new American Airlines service, even though Chicago O’Hare was already served by United. 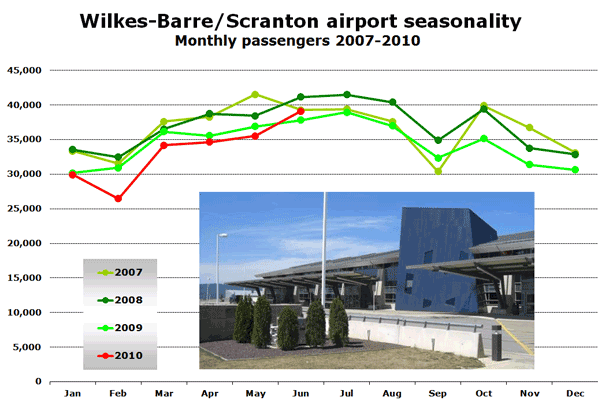 With no direct flights to Florida the airport would appear to be a prime candidate for an airline like Allegiant to start its low-cost low-frequency non-stop flights to the sunshine state. Traffic boost: Only in America – “The Office Convention” at the University of Scranton attracted 10,000 delegates.