Air Arabia now serves 44 destinations in 22 countries from Sharjah, including 13 in India and Athens in Europe An arch of water salutes Air Arabia’s arrival into Athens from its Sharjah hub during its April 2009 launch in which a “ribbon bonding” was staged by the airport’s CEO, Dr Yiannis Paraschis. While Air Arabia has continued to grow from its other North African bases there have been no further launches from Sharjah this year.

Air Arabia’s recent network growth has come from establishing new bases in Morocco (Casablanca) and Egypt (Alexandria), but its main base in Sharjah continues to account for the vast majority of the carrier’s operations. However, after starting seven new routes in 2008 and a further three in 2009, there have been no new routes launched from Sharjah in 2010. The airline accounts for around three-quarters of all scheduled capacity at Sharjah. Last year the airline group carried 4.1 million passengers from its Sharjah and Casablanca hubs (the Alexandria hub only opened in June of this year), an increase of 15% on 2008. During the latest quarter for which the airline has reported figures (Q2), passenger numbers are up 11% to 1.11 million, while load factors reached 82%.

New routes in 2009 to Greece, India, Russia and Saudi Arabia 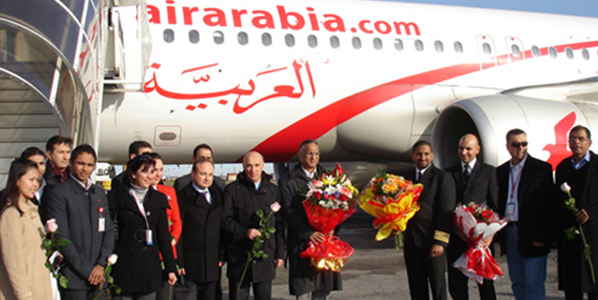 Ocotober 2009: Despite the high number of Russians in the Gulf, the only Russian route so far – to Samara – operated for just one season and has now been removed from the schedules, although within the CIS both Kiev and Almaty remain.

Four new routes were launched from Sharjah during 2009 to Athens, Goa, Medinah and Samara. The Russian route to Samara operated for just one season with two weekly flights and has now been removed from the schedules. This summer, Air Arabia serves a total of 44 destinations non-stop from Sharjah. The network spread is from Athens in the west to Chittagong in the east, and from Kiev in the north to Nairobi in the south.

During the last two years two routes have been dropped. These were to Astana (Kazakhstan) and Yerevan (Armenia), both of which were served with just two weekly flights.

India accounts for nearly one-third of all flights

In total, the airline operates 330 weekly departures to 22 different countries. India is the biggest single country market absorbing 104 weekly departures, or 31.5% of the total. Thirteen separate destinations are served across India, 10 of which are served at least daily. The next biggest country markets by share of total flights are Saudi Arabia (9.4%), Egypt (8.5%) and Syria (6.4%). The airline serves four destinations in Saudi Arabia and three each in Egypt and Syria.