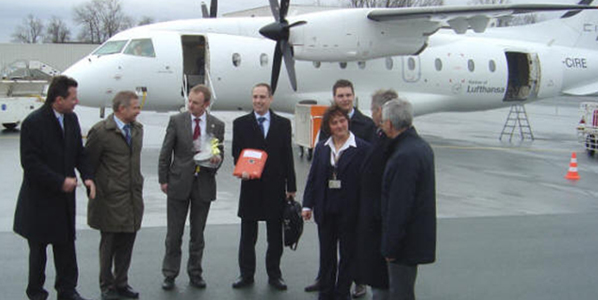 March 2010: Cirrus opens Hof Plauen’s only scheduled service – an important one – to Frankfurt. Besides Team Lufthansa routes, Cirrus also operates a spider’s web network of niche business routes in its own right.

Cirrus Airlines has been operating scheduled services since 1998. With headquarters once again at Saarbrücken airport, many of the airline’s fleet of 13 Dornier 328s of 30-32 seats and its two 76-seat Embraer E170 E-jets are used to operate services as a member of Team Lufthansa. However, the airline also operates a spider’s web network of niche business routes in its own right. Nine of these 10 routes involving 14 airports are all served at least twice daily on weekdays. In total, 10 airports in Germany are served along with two in Switzerland (Bern and Zurich), one in Austria (Salzburg) and one in Moldova (Chisinau). 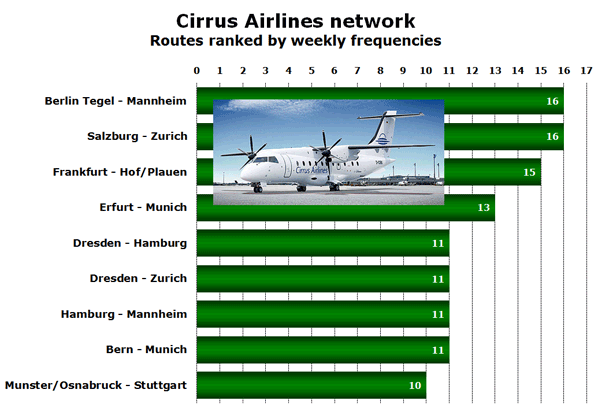 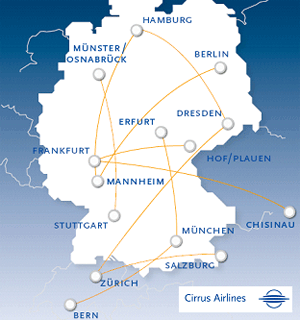 So far in 2010, the airline has launched two new routes. Back in February, services were introduced between Munich and Bern, followed at the end of March by a three-times daily route from Germany’s busiest airport (Frankfurt) to one of its smallest, Hof-Plauen, in northern Bavaria. The link to Frankfurt is the airport’s only scheduled service at present. Similarly, Cirrus is the only operator providing scheduled services (to Berlin Tegel and Hamburg) at Mannheim City Airport, which has a runway only just over 1,000 metres long.

Serving Moldova; are you Cirrus?

According to the airline’s website, the route between Frankfurt and Chisinau (flight numbers C9 1151 and C9 1150) is operated by an A320 belonging to Air Moldova. The two-and-a-half hour flight departs Frankfurt at 15:00 arriving in Moldova at 18:20 (local time). The return flight departs Chisinau at 04:45 in the morning and arrives in Frankfurt at 06:20.

Did you even know there was an airport at Mannheim so close to Frankfurt? In fact, airport boss Peter Ulf Geisler welcomes Cirrus’ 222,222th passenger to enjoy Berlin and Hamburg services.