With bases in different countries, it is not surprising that there is little network overlap between Brazil’s TAM and Chile’s LAN, which announced their merger intention to create “LATAM” last week. The merger has been a long time coming, with close links existing between the Cueto family of LAN and the Amaro family of TAM.

The combination of Latin America’s largest and most successful carriers will create an airline group with over 200 aircraft, with a further 200 on order. It conveniently bridges South America’s Spanish and Portuguese-speaking language blocs via its most dynamic economies, but raises plenty of route planning-related questions surrounding whether it should now follow LAN’s oneworld or TAM’s Star Alliance allegiances.

The announcement trumpeted $400 million in annual synergies which, among other savings, would stem from “alignment of the passenger networks”. But, overall, the two sides placed greater emphasis on the prospects of LATAM’s new routes: “Growth enabled by the transaction would reach new destinations… together, LAN and TAM will be able to offer new destinations that neither company could have supported on its own…”

In this article, anna.aero analyses the meaning of LATAM in purely network terms. 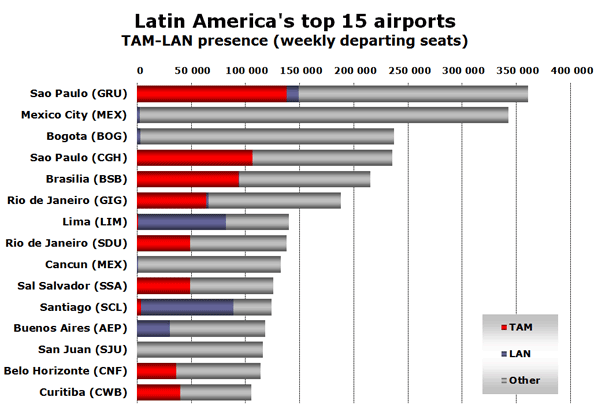 With Brazil as its backyard, TAM is the larger carrier in terms of fleet and passengers carried. Analysis of the 15 busiest airports in Latin America shows where TAM and LAN have the strongest presence.

TAM has a major presence at the eight Brazilian airports that make it into the top 15, while LAN is the dominant carrier at just two; Lima in Peru and Santiago in Chile. It also has a significant presence at Buenos Aires’ Jorge Newbery airport. Among the busiest airports in the region, LAN/TAM have little or no presence in Bogota, Cancun, Mexico City and San Juan.

While having a fairly comprehensive network within lower South America, it is worth examining what long-haul services both carriers offer.

TAM only began non-stop services from Rio de Janeiro to London Heathrow and Frankfurt this week, although both are already served non-stop from São Paulo. Paris was the first European destination to be served by the airline from both Rio and São Paulo. By linking their South American networks, it should become easier to generate additional traffic volumes on these long-haul routes.

It is worth mentioning that due to geographic location and current aircraft range limitations, neither carrier has any services to Asia. Passengers wishing to travel between South America and Asia have a number of options; either via the US with US carriers, via Europe with European carriers or via the Middle East on Emirates or Qatar Airways.

All for one(world) or two for Star?

One issue that has yet to be resolved is which alliance the combined carrier will choose. LAN is a longstanding member of oneworld, while TAM recently joined Star Alliance. anna.aero’s editorial staff are evenly biased between the two alliances, but both camps agree that LATAM probably will choose Star, which offers partners in two important European markets; TAP in Portugal and Spanair in Spain, while oneworld ‘only’ offers Spanish Iberia.