Back in October 2007 when anna.aero last examined the air travel market in Croatia, the country’s three major airports at Dubrovnik, Split and Zagreb were all growing rapidly. This (mostly modest) growth continued in 2007 and 2008 before taking a downturn of between 6% and 7% in 2009. Traffic in the first half of 2010 has not been that encouraging either with Split and Zagreb averaging declines of 6% while Dubrovnik has registered a small increase in demand. 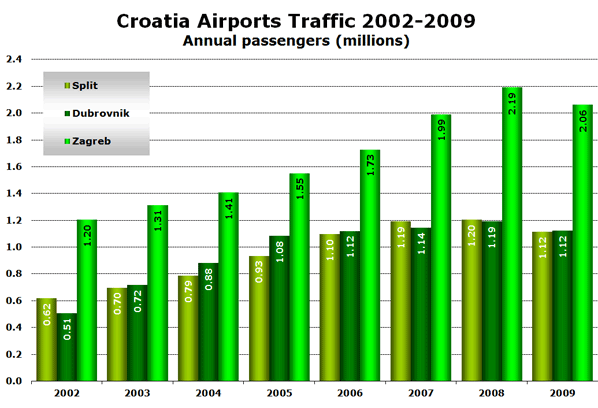 Apart from these three airports there are also regular scheduled services from Pula (307,000 passengers in 2009), Zadar (216,000 passengers last year) and Rijeka. As our previous analysis showed, demand for flights to and from Zagreb is reasonably steady across the year, but demand for the coastal destinations of Dubrovnik and Split is extremely seasonal.

Last year, Croatia Airlines carried just over 1.7 million scheduled passengers (down 4.3%, Source: AEA) at a load factor of 61% (down 3.7 percentage points). It operates 38 scheduled routes (18 from Zagreb, 12 from Split, seven from Dubrovnik and one from Pula) on international routes and operates over 200 weekly international departures from airports in Croatia. It also has a monopoly on the country’s domestic air services. Its fleet currently comprises three A320s, four A319s and six Q400s (Source: Croatia Airlines website). A further four A319s are expected to be delivered during 2012 and 2013. 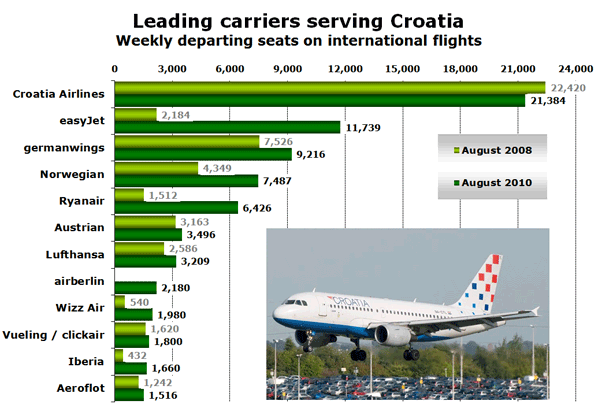 A comparison of scheduled seat capacity between August 2008 and August 2010 shows how low-cost carriers are developing an increasing presence in the country. easyJet has now usurped germanwings as the second busiest carrier in the country while Norwegian and Ryanair have all added capacity. Two more LCCs, Vueling and Wizz Air, also rank among the top 10 carriers in Croatia. easyJet has gone from operating just three routes in the summer of 2008 to 18 routes (10 to Split and eight to Dubrovnik) this summer. From November 1 it will start flights to Zagreb from Paris, followed by London Gatwick flights next March. Norwegian operates 44 weekly departures on 18 routes from its bases in Norway, Denmark, Sweden and Poland, while this summer sees Ryanair operate 14 routes to Croatia; 11 to Zadar, two to Pula and one to Osijek. The increasingly cosmopolitan Dubrovnik apron – the Croatian airports have links to 29 countries, but the UK and Germany dominate with 45% of the seat capacity.

Just two country markets, Germany and the UK, account for almost 45% of scheduled seat capacity during the peak summer month of August. Norway, Spain and Austria lag way behind with just under 6% each. 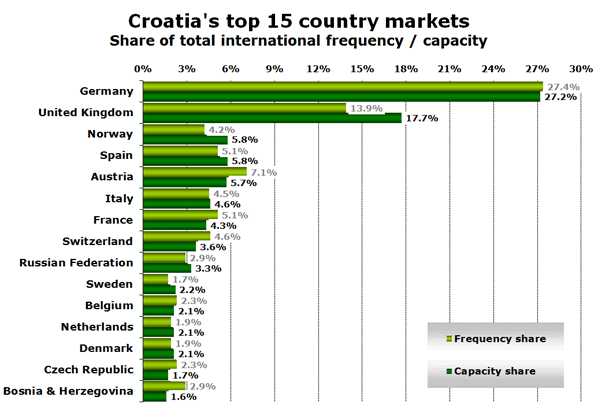 A total of 29 countries are served non-stop from Croatian airports, all of which can be considered as European (if you use the Eurovision Song Contest definition of Europe which includes Israel). There are no non-stop flights to anywhere in the US, Asia or even any of the major Middle Eastern hubs. Osijek Airport's Dorotea Telarović tells anna.aero the story of these slides: “This summer we have regular domestic flights to Split and Dubrovnik with Croatia Airlines (Dash 8-Q400), regular international flights to Frankfurt/Hahn with Ryanair, charter flights to Monastir by Nouvelair and ad hoc cargo flights transporting live cattle from Canada to Osijek with Air Atlas’s 747.”