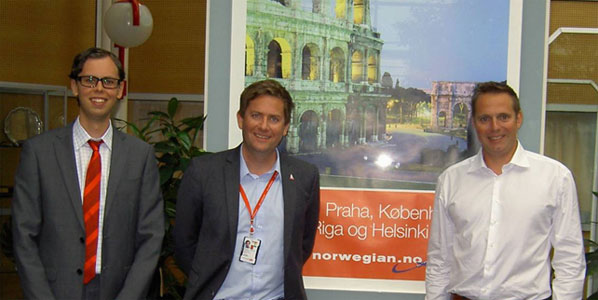 anna.aero’s Assistant Editor Andreas Akerman met with Norwegian’s CCO Daniel Skjeldam and Director Network Thomas Ramdahl at the airline’s headquarters in Oslo for some insight into the developments and ambitions of what is Europe’s third-largest low-cost carrier.

Since anna.aero last analysed Norwegian a year ago, the Scandinavian low-cost carrier has passed the 10-million mark, having transported almost 10.8 million passengers in 2009. In the first half of this year, numbers are up by a further 20%, in spite of disruption caused by the volcanic ash cloud. The airline now ranks as Europe’s third-largest low-cost carrier, behind only Ryanair and easyJet, as it has grown past Vueling.

Norwegian is increasingly threatening its competitor SAS as the dominant force in the Scandinavian market. As an example, on a few Norwegian domestic trunk routes, from Oslo to Bergen, Stavanger, Trondheim and Tromsø, Norwegian currently offers between 43% and 48% of total capacity, with the remaining share provided by SAS. Because of Norwegian’s passengers to a greater extent travelling point-to-point in comparison to passengers in the more transfer-focused SAS network, it can even be presumed that the low-cost carrier has a leading share of these O&D markets. 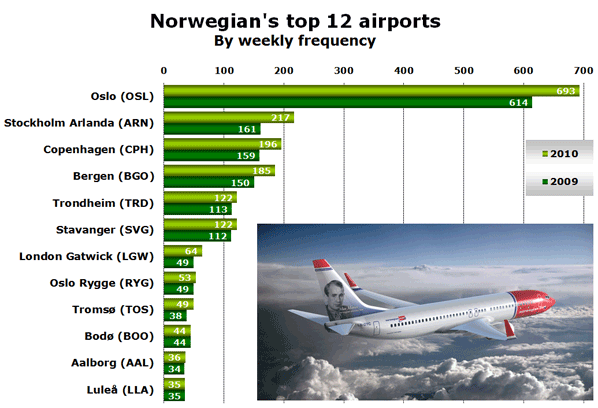 Norwegian has expanded so much in Scandinavia that only one airport outside the region makes its top 12. London Gatwick, which Norwegian has gradually moved over to from its previous London airport Stansted, is served from five airports in Norway (Oslo, Bergen, Stavanger, Trondheim and Tromsø), Copenhagen and Aalborg in Denmark and Stockholm Arlanda in Sweden.

Warsaw base shutting down next week; aircraft moving to Stockholm 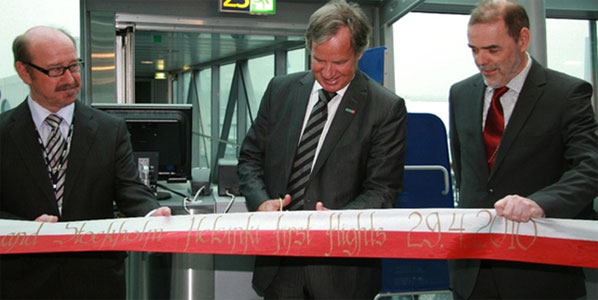 At the end of April, Norwegian’s CEO Bjørn Kjos cut the ribbon for the new route between Stockholm Arlanda and Helsinki. As the airline now closes its Warsaw base next week and moves the aircraft to Stockholm, the clearly successful route gets its frequencies doubled.

Norwegian has operated a Polish base out of Warsaw since July 2006. Initially, there were routes to northern European cities, but as of late, the network has been leisure-oriented, serving southern European holiday destinations. At the end of this month, the base will be closed and the single aircraft moved to Stockholm Arlanda from September, making it the airline’s ninth aircraft based in the Swedish capital. Although this addition does not result in any new route, Norwegian will double weekday frequencies on the newly launched Helsinki and London Gatwick routes. The airline also adds a frequency on weekdays to the Stockholm-Copenhagen route, which then will be served six times daily. Other recent expansions at Stockholm Arlanda are the new routes to Edinburgh and Munich, both of which Norwegian launched in early May.

In spite of the seeming departure from Poland, the airline’s CCO Daniel Skjeldam tells anna.aero how Norwegian remains committed to the market with services from its Scandinavian bases and leaves the possibility of returning with a Polish base in the future.

Norwegian’s Copenhagen base, which was launched immediately after Sterling’s demise in October 2008, is under intense competition. As anna.aero has reported, the two fellow low-cost carriers Transavia.com and Cimber Sterling also operate bases at the Danish capital. Skjeldam does, however, not consider this competitive situation sustainable, but Norwegian is in the market to stay and therefore sees further potential in Denmark.

Fleet growing 40% in next four years; not afraid to pioneer new markets 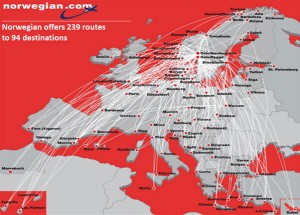 Indeed, Norwegian’s continued expansion will be guaranteed by its large aircraft orders. Although the airline will have phased out its 28 current 737-300s by the end of 2012, deliveries of new 737-800s outnumber the old aircraft by far. By the end of 2014, the airline will operate a total of 73 aircraft, all 737-800s. This is a 40% growth on the current fleet of 52 and, as the 186-seat -800s replace 148-seat -300s, capacity will increase even further. Although the larger aircraft mean that some thin routes will not be sustainable and will have to be dropped, Skjeldam argues that this is outweighed by the cost benefits of the modern single aircraft fleet. Norwegian also claims to already have plans in place until 2014 for the new aircraft.

Expansion is due to take place mostly in northern Europe, but the airline also intends to continue pioneering new markets. The airline began serving Russia as early as 2006 and still serves St Petersburg from Oslo. Norwegian also serves Dubai with seven overnight flights a week (three from Oslo, three from Stockholm Arlanda and one from Copenhagen – all offering intra-Scandinavian connecting flights), maximising aircraft utilisation. Skjeldam sees further potential in Eastern Europe and Turkey.

Although Norway is not a member of the European Union, the country is part of the European Common Aviation Area and Norwegian therefore has full access to the European liberalised market. However, for services outside this area, as a pan-Scandinavian airline, restrictions lie in bilateral limitations and regulatory disadvantages compared to the incumbent SAS.

Long haul next on radar; possible start-up already next year

The next move for Norwegian is likely to be the establishment of a separate long haul airline, for which the first destinations are expected to be Bangkok and New York. These plans have been far-going in the past, but hindered by high fuel prices. No final decision to launch will be made until all the right conditions and low costs are secured, but Skjeldam says operations could begin already next year. He confirms talks with both Boeing and Airbus and, although it has been reported that the airline is eyeing the 787 and A350, aircraft that would not be available for quite some time ahead, he points out the possibility of bridging with other aircraft, although wet leases are not under consideration for cost reasons.