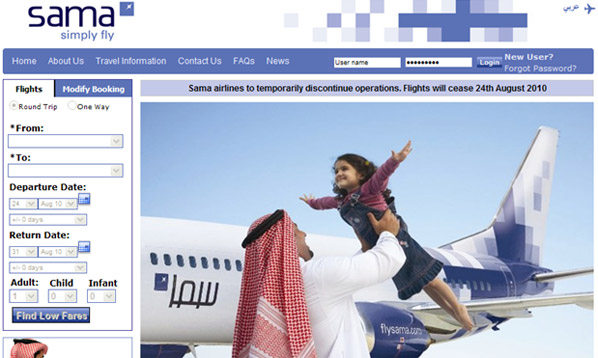 Right now, this is about the best way of getting airbourne: After a brave and enterprising three-and-a-half years, the Saudi Arabian LCC advises visitors to its website that operations are suspended.

According to the airline’s homepage, Saudi Arabian LCC Sama ceased flying at the end of Monday 23 August, although it hopes this may only be a temporary state of affairs. Back in early 2007, there was a race to see which would be the first low-cost airline based in Saudi Arabia to start commercial operations. In the end, Nas Air (17 February) beat Sama (18 March) by just over a month. Initially obliged to operate from a main base in Dammam (Saudi Arabia’s third-busiest airport after Riyadh and Jeddah), the carrier launched domestic flights using 737-300s. When anna.aero first analysed Sama back in August 2007 it was operating four 737s (all based in Dammam) and was flying purely domestic routes.

During the last three years, the focus has changed significantly towards international routes once the airline was permitted to operate them. As of last week, the airline’s network consisted of 16 routes, of which only three were domestic. In the intervening period, the airline’s fleet has grown to just six aircraft, although initial presentations indicated plans to have a fleet of 35 aircraft by 2010.

These international routes accounted for almost 70% of the airline’s weekly seat capacity, with Syria (19 weekly departures) and Egypt (17 weekly departures) being the two biggest country markets. Apart from these current routes, the airline also served several other international destinations at some point during the past three years. These included Abu Dhabi (UAE), Latakia (Syria), Mumbai (India), Sharjah (UAE) and Sharm El-Sheikh (Egypt).

As part of its legal obligation to operate some Public Service Obligation (PSO) routes within Saudi Arabia, the carrier also flew a 29-seat British Aerospace Jetstream J41 at one time on several routes from Hail.